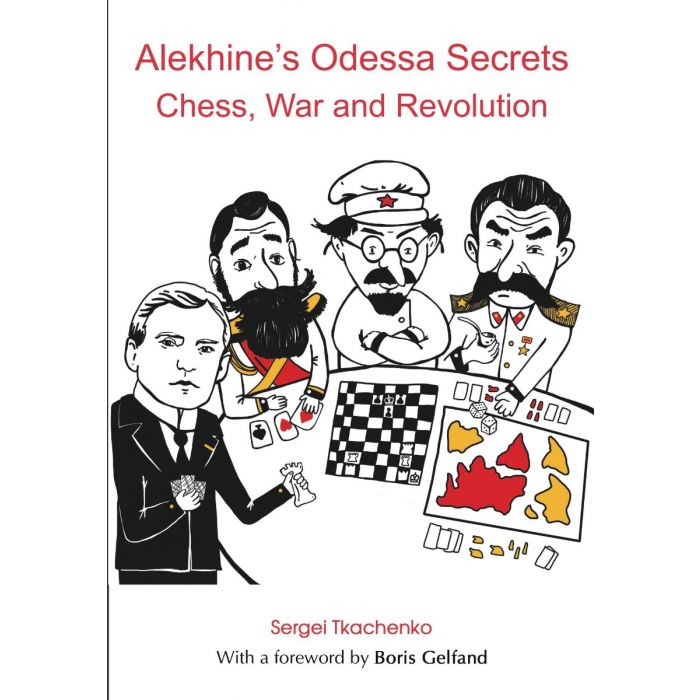 Sergei Tkachenko has written a fascinating account of Alexander Alekhine’s time spent in Odessa during World War I, the Russian Revolution and Civil War, as well as of the impact of Odessa on his later life. Sergei, an Odessa native and ex-world chess composition champion, has carried out original research drawing from Odessa, Voronezh, Cheka and KGB archives among others, as well as local newspapers from the time. His research, together with a review of Russian-language secondary materials, has dug up lots of new information and analysis on Alekhine, including on his trips to Odessa and their reasons, his service during World War I, his interrogations by the Cheka and his ties to the White Movement. Sergei portrays Alekhine’s Odessa relatives and the Odessite chess masters against whom he played a number of friendly and simultaneous games during his three trips to the Ukrainian city.

Sergei provides a detailed description of chess in Odessa from the beginning of the nineteenth century and through the upheavals of the early twentieth century, including the city’s leading chess organizers, the main and university chess clubs, and even high society’s chess-themed ballroom parties. He goes on to describe the chaos under Bolshevik rule during the Civil War, during which Alekhine was arrested by the Reds and very nearly executed. The author reviews the backdrop to Alekhine’s arrest and investigates the circumstances of his last-minute release. His heart-rending account of terror by the Cheka brings home to the reader how near the chess world was to losing its greatest player of the first half of the twentieth century.

This book then goes on to review the strong Odessa links with key events surrounding Alekhine later – his exile, failing marriages, plans for a match with Botvinnik, murky death and eventual burial ten years later.

Alekhine’s Odessa Secrets: Chess, War and Revolution includes 24 complete games (some handicapped) with annotations from Alekhine, Sergei Tkachenko and Sergei Voronkov (co-author with David Bronstein of Secret Notes), as well as five puzzles and one fragment. Alekhine played in 22 of these games and the fragment and set three of the puzzles.

Furthermore, the book contains around 100 photos, mostly of Alekhine’s Odessa contemporaries among chess masters and politicians, as well as of the places he frequented in Odessa and key publication clippings and memorabilia.

With an introduction to the English edition by Boris Gelfand.

Alekhine: My Best Games of Chess