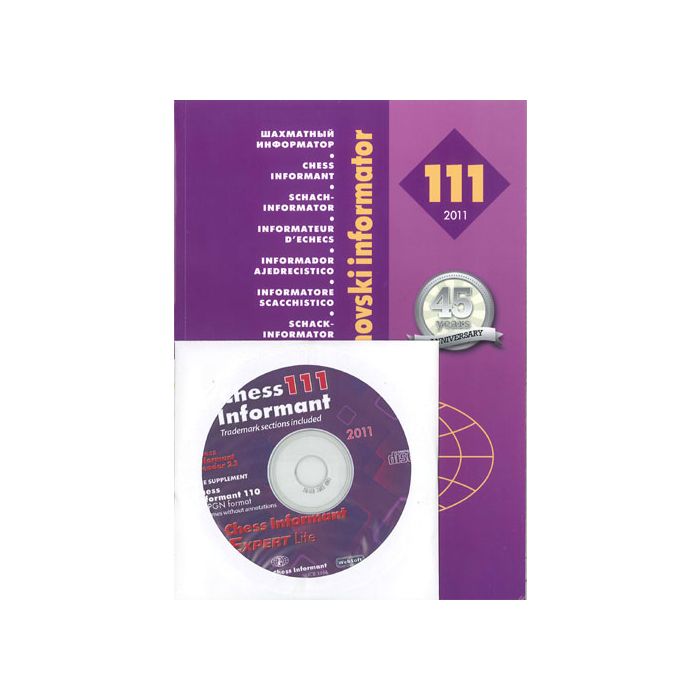 You will also find the Portrait of Alexander Grischuk and voting for the best ten games and ten most important theoretical novelties from Chess Informant 110.

Beyond this, there are two new columns: "Chess History" written by Harald Fietz, about the famous San Sebastian 1911 tournament and the centenary of José Raúl Capablanca's first visit to Europe; and "Women in Chess" by WGM Anna Burtasova, dedicated to the legendary Maia Chiburdanidze, who celebrated her jubilee birthday in 2011.

Notable new additions to our contributors roster include Inarkiev, Sargissian, Kiril Georgiev, Parligras, Zhao Jun, Delchev, Zontakh, Igor Miladinovic and Predojevic. Not to mention that you don't want to miss two exceptional games by Zhao Jun from Beijing; these games will be among the candidates for best game accolades.

Moreover, Chess Informant 111 gathers together some of brightest young guns of today's chess world. You surely must have heard of American stars Shankland and Naroditsky, Philippine tigers Wesley So and Darwin Laylo, African champion Bassem Amin from Egypt, as well as promising players like the Kalmykian Sjugirov from Russia, Sanikidze from Georgia or the Hungarians Berczes and Erdos.

What's new
Chess Informant Labs - Wesley So joins the crew. Our new editor-in-chief, GM Branko Tadic, was completely amazed by the quality and depth of the annotations that one of the world stars, Wesley So, contributed to Chess Informant 111.

So's coverage of the Grünfeld Defence was so complex and interesting that we had to create additional space inside CI Labs for a further theoretical survey; one which gained the admiration of his CI Labs colleagues.