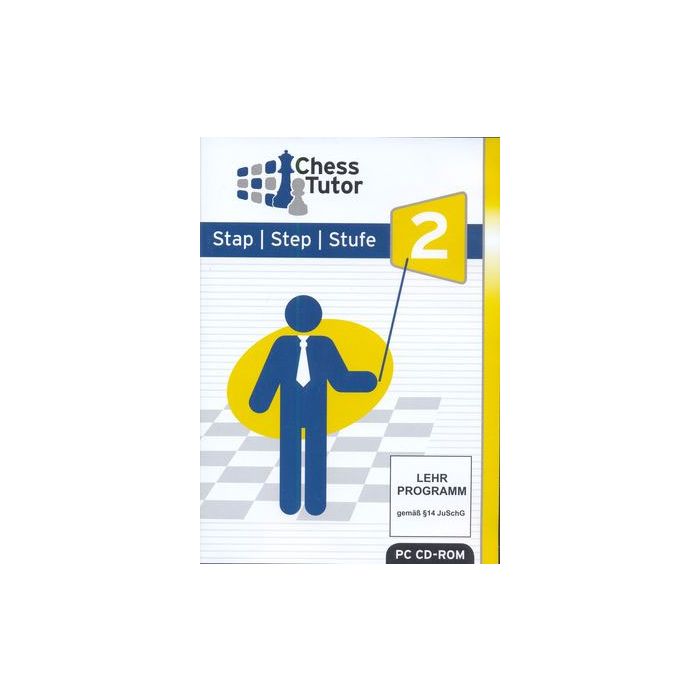 We are proud to offer the Chess Tutor for Windows, a series of chess learning software based on the successful 'Steps Method' by Brunia/van Wijgerden. The system contains several steps from beginner to master.

In the now available second step you will learn the basic rules of tactics and positional play as well as many attacking patterns and techniques to win material.

You can first try the Chess Tutor using our free demo version. We are convinced to offer the best currently available software to learn chess with the computer.

In the first step, the elementary knowledge is acquired which every successful chess player needs. It is here that the Stappenmethode differs fundamentally from other teaching methods. For example, at the start delivering checkmate plays no part.

After all, you do start learning to drive with parking. The early stages of the program thus present easily comprehensible steps and exercises, which are immediately assimilated through play. In addition, in the Chess Tutor the Stappenmethode is complemented by a lot of new activities for learning and practice.

None of the chess positions and the practice exercises in the program have yet been published, meaning that even those who know the Stappenmethode will be able to discover much that is new to them.

• Under the surface of the program, another program is working, a chess program, an engine. The old Tasc Tutor was not able to play chess, which of course was an enormous failing. Every reply from the user had to be anticipated. The sheer weight of the numbers involved led to there being usually only the answer “The answer is wrong”. Now the response is much more flexible (“The king is in check, but Black still has a move.”) and the computer demonstrates the reply. The user learns much more like that.

• The fact that there is a chess program now makes it possible to employ the knowledge which has just been acquired. Positions can be played out to a finish and even complete games can be played. In Step 1 even a beginner is able to win, because the engine plays badly, yet in an intelligent way. It also sometimes loses pieces and allows itself to be checkmated.

• Naturally there has been an enormous leap forward in the graphics capabilities of computers. Good use is made of