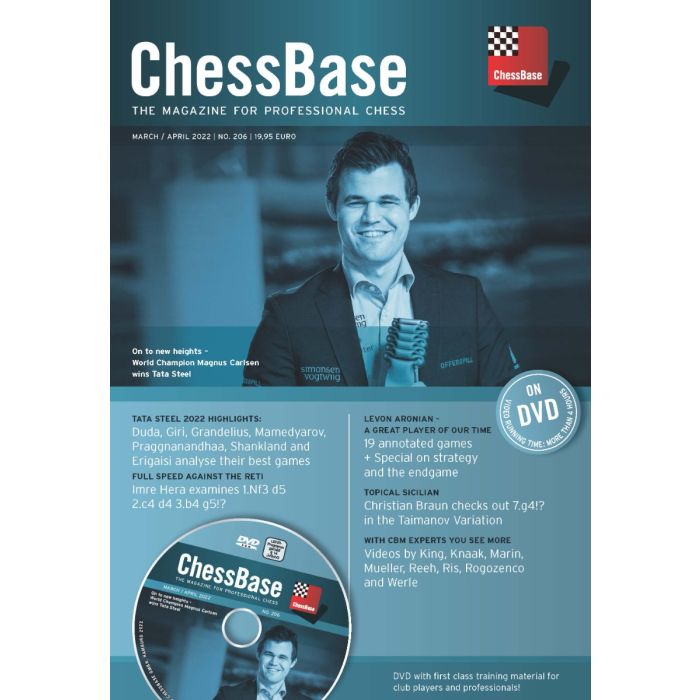 CBM authors analyse their favourite game of the Armenian. Exclusive collection of 19 annotated games from 1994 to 2021.

Daniel King once again takes up an idea by Daniil Dubov, this time in the Tarrasch Defence (7...cxd4 8.Nxd4 Bc5)

Mihail Marin offers some reflections on the Flohr-Mikenas System based on games by the "hero" of this issue, Levon Aronian

Let Robert Ris put you to the test. Nodirbek Abdusattorov sets off fireworks with many surprising ideas against GM Sethuraman in the Exchange Variation of the Slav Defence. Can you find the moves of the new Rapid World Champion?

Mihail Marin examines the Armenian's extraordinary understanding of the game through the categories of "Pawn play", "Rook play and open files", "Coordination and harmony" and "Exchange sacrifice"

Tactics: Knights on the rampage

Endgame highlights from the 2021 World Championship match and more

Karsten Müller provides comprehensive training material for the highest demands, including the "Endgame Highlights from the World Championship Match 2021", a selection of the best "Endgames by Levon Aronian", and further analyses in "Readers write"