Go-Getter Gets Grandmaster title
Author
ACM
Out of stock 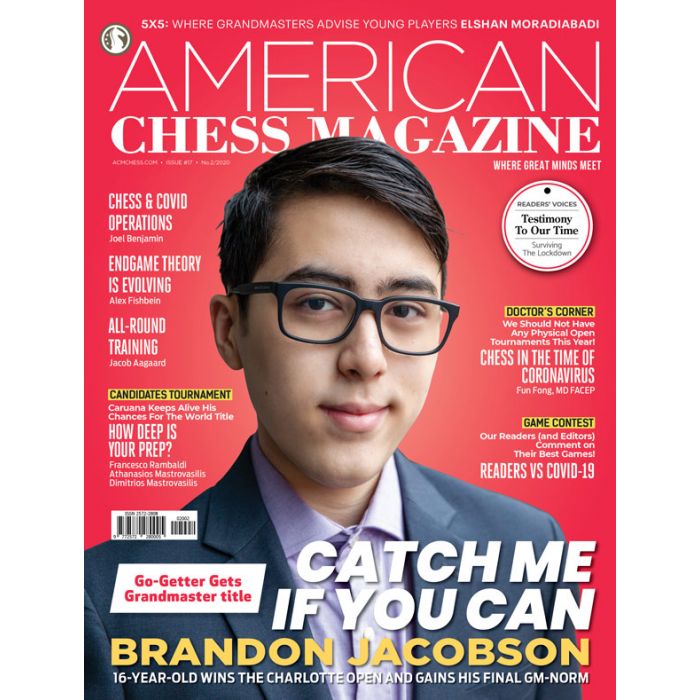 About / American Chess Magazine no. 17

The remarkable young man portrayed on the cover of ACM #17 is none other than the latest American Grandmaster – Brandon Jacobson. Brandon’s best chess results were achieved after he was accepted at the prestigious Columbia University at the age of 14(!). Here, exclusively for ACM, Brandon tells the story of his journey towards the elite chess title. His own analyses of key games, in which he had to overcome serious challenges, are highly instructive and will surely be an inspiration for any other go-getter on a similar quest. In the interview that follows, Brandon talks about his teenage experiences both in chess and life, while emphasizing the importance of family support.

The global COVID-19 pandemic has now forced a shutdown of over-the-board competition, which even included a premature termination of the FIDE World Championship Candidates. Nevertheless, grandmaster brothers Athanasios and Dimitrios Mastrovasilis present round-by-round reports and thorough annotations to almost half of the games that were actually played in this most important chess event of the year. Moreover, GM Francesco Rambaldi turns the spotlight on an energetic opening idea with which Fabiano Caruana was able to score his solitary but crucial win in the event to keep alive his chances of a re-match with Magnus Carlsen for the world title.

The drastic effects that the coronavirus has had on chess, as well as life in general, are underlined by an ER physician who works on the front line in the fight against this invisible enemy - MD Fun Fong, a long time chess organizer, president of the Georgia Chess Federation and a candidate for the USCF Policy Board. Undoubtedly Dr. Fong’s professional views on the present pandemic and recommendations for any possible future return to OTB chess will represent welcome guidance to both organizers and competitive players across the nation.

On the eve of international lockdown, GM Joel Benjamin ventured a chess trip to Prague, where he and his fellow U.S. veterans proceeded to repeat their victory in last year’s World Senior Team Championship. They then faced an even bigger challenge of getting back home because of major flight cancellations…

In the absence of tournament games due to the present crisis, we decided to organize a different kind of chess competition for which we asked our readers to submit for possible publication their best, favorite or most dramatic game, together with their own annotations. Moreover, to get the show on the road, members of our Editorial Board also joined in the competition – hors concours of course as there is a $100 prize for the finest entry! The winner’s name will be revealed firstly by email and then announced publicly in our next issue. While the main purpose of our game contest was to give readers an opportunity to showcase their own brilliant play in the ACM, it was undoubtedly also to provide an excuse for ACM staff to prove that they too can actually play chess!