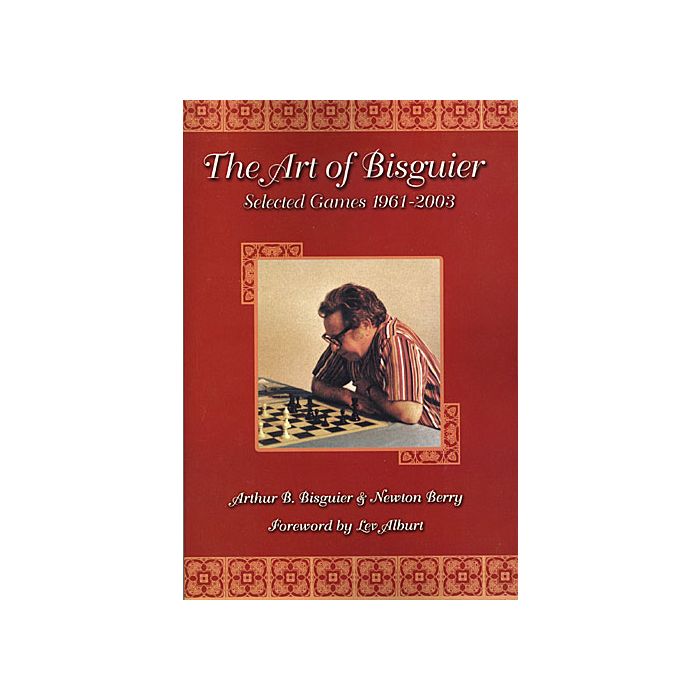 About / The Art of Bisguier

Arthur Bisguier is a living legend in American chess, having met and defeated some of the greatest players in the world. This is a collection of his best games - annotated by Bisguier himself - from 1961 through 2003.

Each game is introduced with an anecdote and brief comment about Art’s opponent and combined with many archival photos, makes this one of the great chess game collections ever.

What sets this book apart from other game collections are the stories that preface each encounter. Bisguier, who has lived American chess history for over 60 years, has always been known as an excellent raconteur and his memory for the clever observation and ability to bring to life Caissa's departed soldiers is second to none.

He quotes the Seattle master Olaf Ulvestad on to the difference between a master and a grandmaster ("A master studies the board, calculates, deliberates and at last makes the correct move. A grandmaster tosses a piece in the air and it lands on the proper square.")

This explanation struck a chord with Bisguier who has always strongly relied on his intuition when selecting a move.

With opening and player indexes and many black and white photographs.

Former US Champion GM Lev Alburt:
"One of the best game collections I’ve ever seen."

Steve Giddins, British Chess Magazine:
"The list of opponents includes Bronstein, Tal, Geller, Gligoric, Karpov, Keres, Kortchnoi, Larsen, Petrosian, Smyslov, Spassky. Bisguier's style was predominantly tactical, but he was also a fine endgame player as this book shows. Interestingly, he was a regular player of the 'Berlin Wall' against the Ruy Lopez, long before anybody had heard of Vladimir Kramnik, and this book contains several examples."

IM John Donaldson, ChessToday:
"What sets this book apart from other game collections are the stories."

Alex Dunne, ChessLife:
"Exciting and insightful (..) the history of chess, sharp attacking games, and the human side of some of the the strongest chess players in the recent past."

John Watson, The Week In Chess:
"I'd recommend this book in general, and in particular to anyone with an interest in chess biographies/game collections, as well as those who would enjoy reminders about the bygone players of the American chess scene."

FreeChess:
"If I were going to spend the next four weeks on a desert island and I could take four of this year's chess books with me, then 'The Art of Bisguier' would certainly be one of them."

Sean Marsh, CHESS Magazine:
"A number of excellent photographs augment a fine work (..) This is an excellent book"