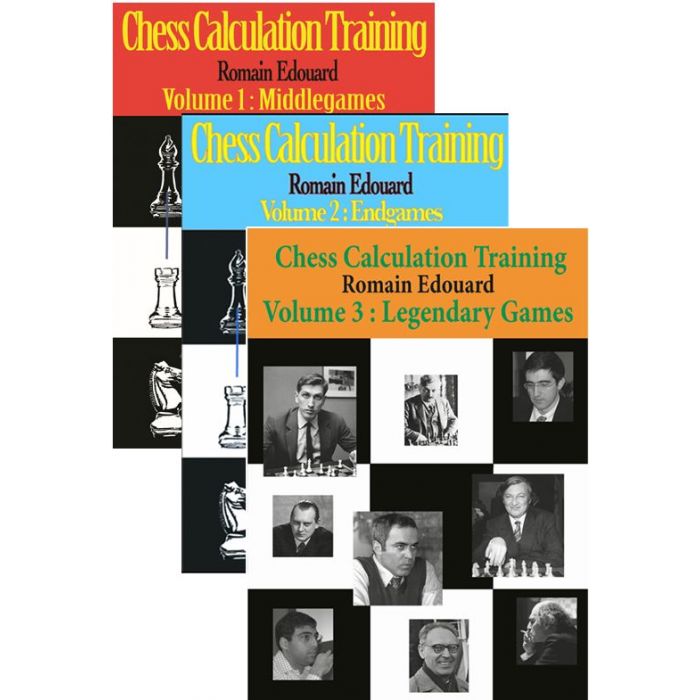 Volume 1: In his first volume, he focuses on middlegames. Romain has carefully selected 496 positions, which arose in real games in the recent past. To obtain the best possible training result out of each position, he has separated the exercises into 11 different categories, covering both tactics and strategy, attack and defence.

Volume 2: The second book focuses on endgames. There are a lot of things to learn “by heart” about them — but they are often difficult to apply at the board, unless you get exactly the same position as you studied. This is why I believe it is an interesting approach to present an endgames book as a series of exercises, with instructive but practical positions. As in Volume 1, a lot of calculation will be required. The major difference between middlegame and endgame training is, of course, the limited material on the board. This means the patterns you discover in training are much more likely to appear in your games — so you should try to imprint them somewhere in your memory!

Volume 3: The third book focuses on legendary games.
This book is a mixture of all kinds of exercises, but with one thing in common - all the games were played before the year 2000, except for a few by two big names, Kasparov and Karpov.
Going through thousands of games the author found many exceptional positions that have been ignored by previous books and articles, as engines were too weak at the time, and analysis too superficial, to appreciate the depth of some combinations or some moves that had been missed. In this book you will come across many of these examples as well as a few famous positions that you may already have seen - just for the record!

Romain Edouard, with a highest rating of 2702, is part of the French National Team since 2011. As a teenager, he notably won a gold medal in the European U16 Championship in 2006, and silver medals in the Europe and World Championships under 18 in 2007. Since becoming an GM at only 18, he has won numerous international events.