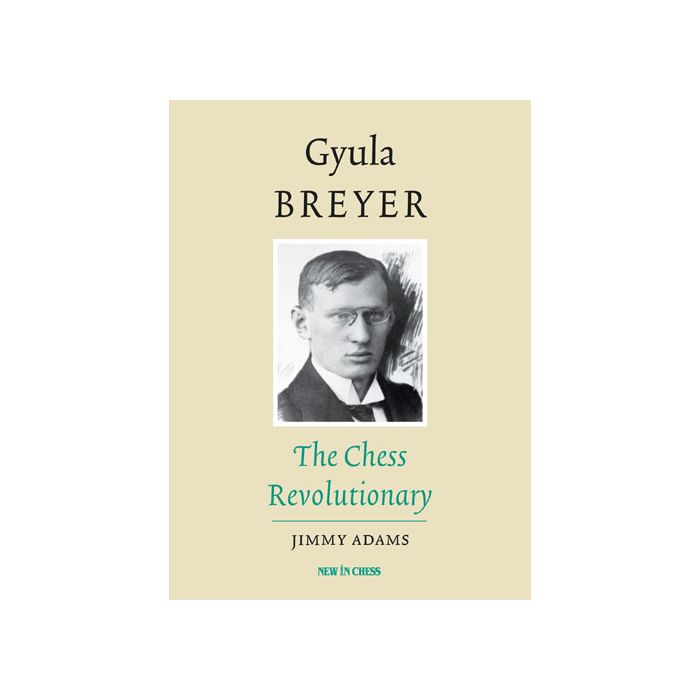 Gyula Breyer (1893-1921) was a highly successful and imaginative chess player. He won the championship of his native country Hungary as a teenager and achieved remarkable results against the leading players of his day.

But first and foremost, Breyer was a revolutionary in his chess thinking. He promoted the idea of dynamic chess and formulated many of the Hypermodern concepts, long before others started their investigations. Yet, after his death, he was omitted from most of the chess history books and today is only known for the Breyer variation, an ever popular defence against the Ruy Lopez.

However, Jimmy Adams has now unlocked Breyer’s legacy from the archives and made it accessible to the chess world at large. This monumental book presents 240 of his games, annotated by Breyer himself and many others. It also features a large number of articles, columns and fragments from newspapers, magazines and books, sparkling with chess and literary wit. The majority appear in English for the first time – and indeed in any language other than Hungarian.

By piecing together this material in chronological order, Jimmy Adams has constructed a mesmerizing biography covering Gyula Breyer’s intense, unconventional and ultimately tragic life. Included as well is a collection of his chess problems, some of which are truly amazing.

GM Raymond Keene:
"In terms of importance this book ranks at the top with Kasparov's ‎various mega series, Nimzowitsch's ‘My System’ and Alekhine's books of his best games. Games, notes, discreet modern corrections, scholarly research,  history, theory and perhaps most impressive ‎of all, Breyer's Philosophy of the art, science and sport of chess!"

CHESS Magazine (UK):
"The Hypermoderns owed much to Breyer, as becomes clear in this fine, detailed biography."

International Master John Donaldson:
"A magnificent tribute to one of the unsung heroes of the early 20th century (..) This book has almost everything one could want in a game collection (..) This is a book that all those with an interest in chess history will want to have."

Davide Nastasio, Georgia Chess news:
"This book on Breyer is amazing (..) When I got this book I thought I was just adding another biography to my shelf of chess biographies. Instead I discovered, thanks to Adams’ meticulous work, a world of chess ideas I had ignored (..) I believe everyone should read this book."

IM Gary Lane, British Chess Magazine:
"A thoroughly entertaining story that whisks you along to the dramatic end. There is a lot to admire in this clear and readable guide to a largely forgotten chessplayer who was way ahead of his time."

James Vigus, author of ‘Play the Slav’:
“This magnificent tome is the product of decades of research (..) Most of us tend to buy opening books and works of instruction rather than history. This one is worth making an exception for – and difficult to put down.”

PRAISE FOR MIKHAIL CHIGORIN: THE CREATIVE GENIUS, BY JIMMY ADAMS:

“A stupendous new book, one of those rare events that represent milestones in chess publishing history.”
Grandmaster Raymond Keene, The Times

“It is hard to see how this book could be improved.”
Sean Marsh, CHESS Magazine (UK)