Jan Werle: A Modern Approach against the Sicilian Vol.1 + 2

Jan Werle: A Modern Approach against the Sicilian Vol.1 + 2 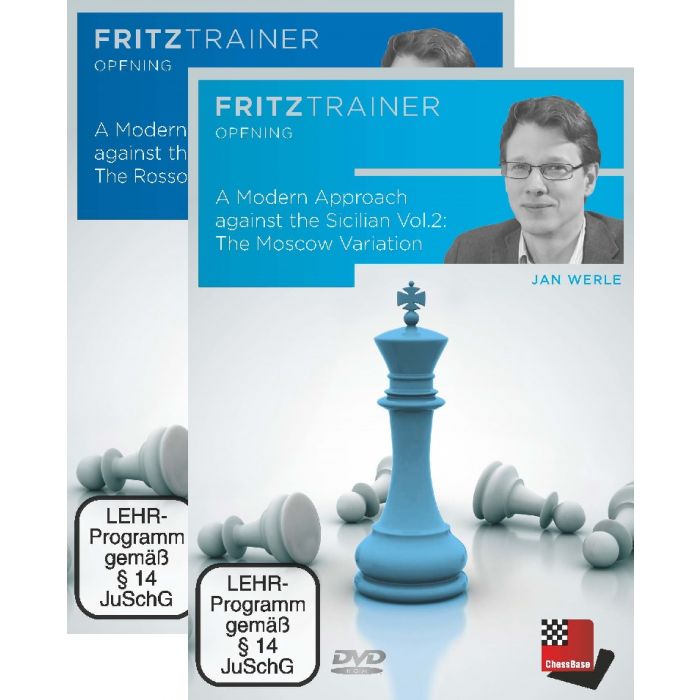 About / Jan Werle: A Modern Approach against the Sicilian Vol.1 + 2

Do you not have time to follow the latest and most aggressive developments in the main lines of the Sicilian, but still want to be able to obtain comfortable positions with White? With its solid but venomous main and sidelines, the Moscow Variation is a perfect choice.

These DVDs will show you dangerous new sidelines that are ideal for combatting the Sicilian after 1.e4 c5 2.Nf3 d6 3.Bb5+, with your author giving you the positional ideas behind less well-trodden Sicilian paths that avoid the main and winding main lines after 3.d4. The most criticical sidelines are peppered with novelties, which are likely to surprise your opponent. With comprehensive explanations of the positional ideas, this DVD is suitable for everyone from beginners who are just starting out, right through to GMs who want to take advantage of the host of novelties in the dangerous but not very well-known sidelines.

You can then test both your theoretical knowledge as well as look at typical ideas in model games in the numerous accompanying interactive videos.

GM Jan Werle is a professional chess trainer, coach and author. In 2008 he became EU-champion in Liverpool and reached his peak rating of 2607. Hereafter finished his law studies obtaining two master law degrees (civil and commercial law) before he commenced with his job as a lawyer. However, his main passion, chess, prevailed and led to a comeback. He is, inter alia, giving chess lessons online to pupils worldwide, but also in schools. He enjoys to help and teach his students and to watch them improve. He combines the teaching with the playing of tournaments, keeping up his own level.