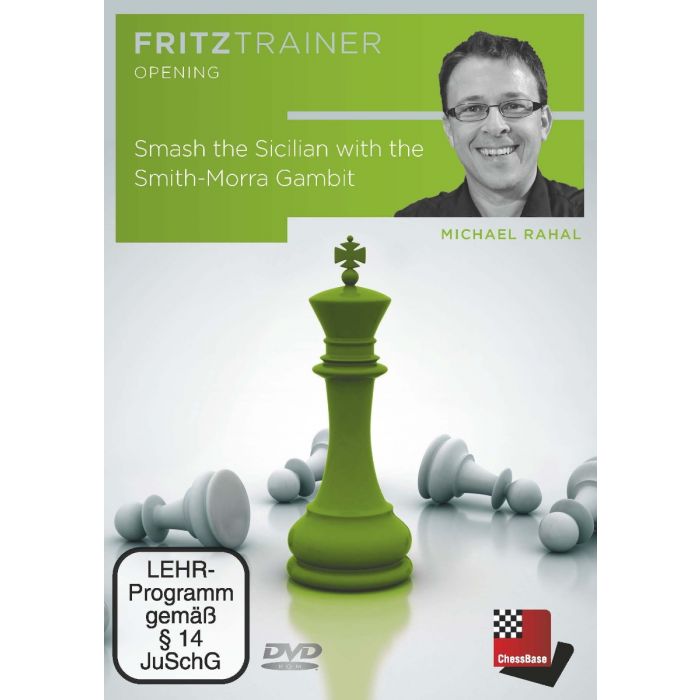 About / Michael Rahal: Smash the Sicilian with the Smith-Morra Gambit

The Smith-Morra Gambit (1.e4 c5 2.d4!) is a great attacking weapon against the popular Sicilian Defence. On move two White sacrifices a pawn for fast development and good attacking chances, and Black can easily fall into one of the many devious opening traps. With this gambit in your opening arsenal you are highly unpredictable and able to deal heavy blows at short notice. Your opponent will have to solve concrete problems from the beginning and can easily be under pressure before move ten!

In this 4+ hour DVD International Master Michael Rahal uses model attacking games to illustrate the main ideas behind White’s aggressive approach. With more than 25 years of teaching experience, he keeps the lines you have to memorize to a minimum and instead focuses on general ideas, concepts and attacking patterns. Covering Black’s  most important replies, setups and sidelines, the DVD also features a test-yourself quiz and a database with additional material. The Smith-Morra is a great way to have fun on the board and play exciting chess!

Born in England in 1970, Michael Rahal is an International Master and a FIDE trainer. Currently living in Barcelona (Spain), Michael is fluent in English and Spanish and has been coaching chess players of all ages and levels for more than 25 years. More recently he has developed his career as a chess broadcaster, covering both online and on-site many top events on Playchess and the ICC, including a leg of the recent FIDE Grand Prix. You can also follow him on Youtube where more than 10.000 subscribers enjoy his instructive chess videos.