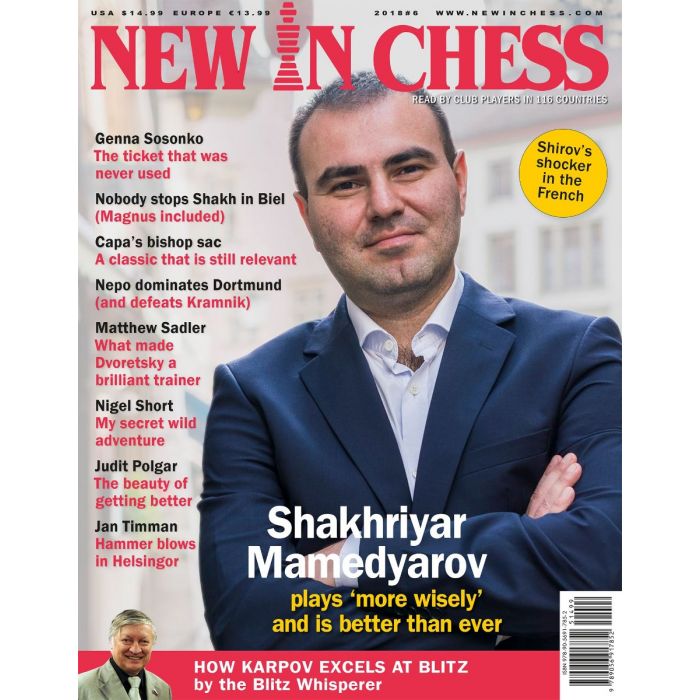 Mamedyarov outplays Carlsen in Biel
Magnus Carlsen was the undeniable headliner in Biel, but the indisputable star was ‘Shakh’ Mamedyarov, who finished one and a half points ahead of the World Champion. Nico Georgiadis, who played a crucial game against Carlsen, reports from an unusual perspective.
Nepo dominates Dortmund
In a seven-round sprint, Ian Nepomniachtchi finished a full point ahead of his closest pursuers. Vladimir ‘Mr Dortmund’ Kramnik fought like a lion but took too many risks.
Hammer blows in Helsingor
Jan Timman was impressed by the games that Jon-Ludvig Hammer played to win the Xtracon Open, including one ‘that his friend Magnus Carlsen would have been proud of’.
NIC’s Café
Finally, Lennox Lewis and Vitaly Klitschko will step into the ring for a revenge fight… on the chess board.
Your Move
Why did Reuben Fine lose an easily won game against Samuel Reshevsky in Pasadena 86 years ago?
Mamedyarov in top form
A graphic about the recent rise of Azerbaijan’s number one.
Fair & Square
Don Henley reveals that not everyone was thrilled when The Eagles recorded their hit ‘Desperado’.
Short Stories
When one of his opponents in the FIDE presidential elections posted a combination that he was proud of, Nigel Short decided it was time to fulfil an old promise to our readers.
Secrets of Opening Surprises
Shirov’s shocker in the French Rubinstein.
Chess Pattern Recognition
Capa’s bishop sac against Bogoljubow in Moscow 1925 is a classic that remains relevant today.
The Blitz Whisperer
Maxim Dlugy examines Anatoly Karpov’s inimitable style… in blitz!
Sadler on Books
Matthew Sadler reviews a rich and varied bouquet of new books.
Judit Polgar
Studies are aesthetically pleasing and intellectually challenging, but they also help you become a better player, as Judit Polgar shows.
The Ticket
Genna Sosonko wrote a fine addendum to his latest book, Evil-Doer, Half a Century with Viktor Kortchnoi.
Chess Training with Tactics
Find the right moves.
Going digital
Hans Ree muses about his initiation, years ago, into the digital age.
Just Checking
Which three people would Cristian Chirila like to invite for dinner?