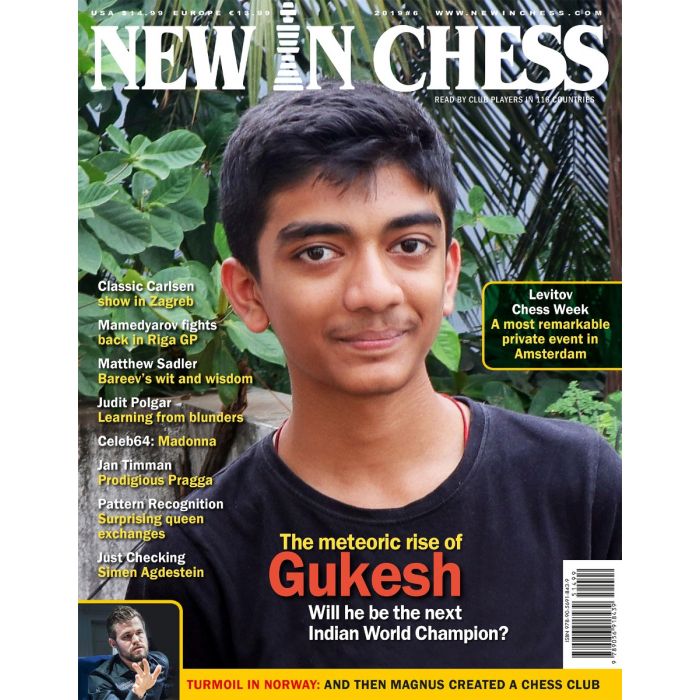 In Ekaterinburg you can have a chessboard and pieces home delivered by a courier on horseback.

Is it true that Deep Blue is hanging out unrecognized in Washington Square in New York?

Bobby Fischer was lightyears ahead of anyone else. Or was he not such a superior champion? And not everyone shares Nigel Short’s views on the Falklands.

12 Magnus on the march

An infographic on the World Champion’s recent string of successes.

Hunter Davies knew it all along: Chess is a drug. They’re all addicts, players and press.

In another sparkling show of creativity and willpower, Magnus Carlsen outclassed the field in the first classical leg of the Grand Chess Tour in Zagreb.

How a bitter feud about gambling may revolutionize chess in Norway.

42 The meteoric rise of Gukesh

Perhaps the greatest Indian talent to follow in the footsteps of Vishy Anand is 13-year-old Dommaraju Gukesh, the second youngest grandmaster in history.

Once again Shakhriyar Mamedyarov proved what an unpredictable force he is. After his early elimination at the Moscow GP, the Azeri star bounced back with a win in the Riga Grand Prix.

Blunders used to be gross mistakes, but these days there are also high-level ‘blunders’ that every player can draw lessons from.

Inflicting doubled pawns on yourself by offering a queen exchange: why would you do that?

68 The spirit of Amber

At the Levitov Chess Week eight top GMs competed at the Waldorf Astoria in Amsterdam, almost unnoticed, including Vladimir Kramnik, who briefly came out of retirement for this private party.

Maxim Dlugy shares what he learned from the blitz games of the Paris leg of the Grand Chess Tour.

Matthew Sadler gives you a taste of a rich harvest of new books.

At the Xtracon Open in Helsingor, Rameshbabu Praggnanandhaa won his first major international tournament at the tender age of 13 years and 11 months.

Does Simen Agdestein believe that chess players have typical shortcomings?