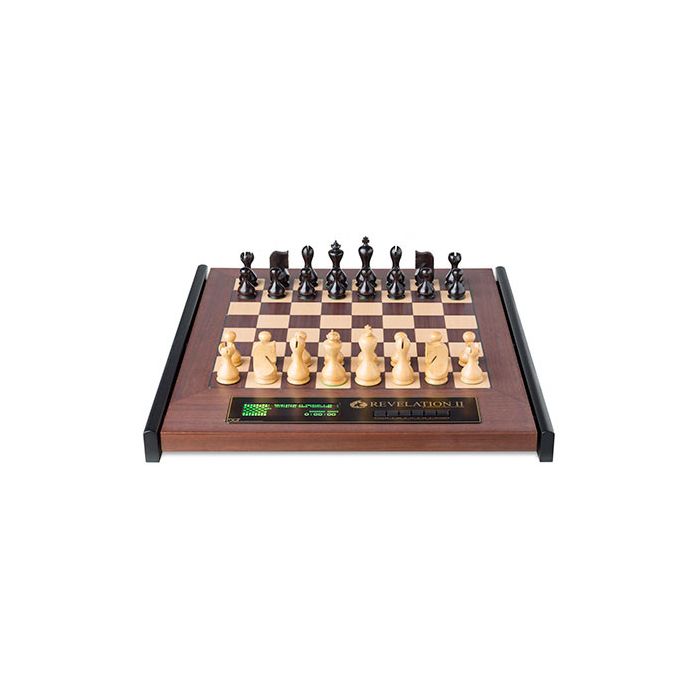 Designed for your ultimate chess playing experience Revelation II is the perfect combination of a luxurious wooden chess board and integrated chess computer system developed in the Netherlands by Digital Game Technology and Phoenix Chess Systems.

The tournament size chess board is an innovative DGT sensor board with individual piece recognition and inlaid LED lights to indicate the chess moves. The green OLED display and six large keys give this stand-alone system a classic menu controlled operation available in English, French, German, Dutch and Spanish.

Complete it with your personal choice of hand carved electronic DGT chess pieces. The primary function of Revelation II is to play against modern world class top chess programs. Combined with the onboard processing power this ensures a unique and unprecedented chess playing experience.

Revelation II unites multiple super strong commercial and freeware chess engines resulting in a great diversity in computerized chess play at ELO levels up to 2800 and above. Embedded chess engines run on Revelation II but the system can also make use of engines running on a PC or laptop by establishing a wireless Bluetooth connection.

New and updated engines will be available from the download section of this website and with upgrade possibilities for additional Flash Storage, stronger (Multi Core) CPU and new software or hardware add-ins, your chess pleasure is guaranteed future proof!

Revelation II can emulate many world championship winning chess computers from the past giving the user a chance to return to the 80's and 90's of the last century when chess play against dedicated chess computers was at it's peak. A Retro Software pack with nostalgic Ed Schröder and Richard Lang emulations are available.

In combination with modern engines the Retro Software very much broadens the range of the Revelation II chess playing experience for chess players of all levels.

• Fully standalone chess board, equipped with onboard embedded Marvell PXA320 high performance processor to facilitate the onboard chess engines
• The PXA320 is the fastest processor in the well-known PXA/XSCALE series and runs at 800+ MHz
• The implementation of this PXA320 has a 32 bit wide data-bus, and a large CPU cache to ensure that the engines will run at their best performance
• 128MB of DDR SD RAM ensures sufficient memory for large Hash tables
• 1 GB Flash Memory giving plenty of storage to upgrade with new chess engines as they become available
• The chess board is multi chess engine, so you can select from a number of chess engines
• The system contains three commercial engines at delivery and can be upgraded with more chess engines in the future
• Top performing chess engines included are Hiarcs, Shredder and The Baron
• Freeware and/or open source engines such as well-known programs Fruit, Toga, Ruffian and Rybka are also included
• ELO levels can be adjusted to play at your level (depending on engine settings)
• Compared to running the same chess engines on a PC or laptop, Revelation II offers unique options and possibilities such as the possibility to turn down the speed of the onboard processor to play at levels from 1500 ELO and up (available after upcoming Firware upgrade)
• The chess board is using the great individual piece recognition technology from DGT ensuring that analyzing and setting up