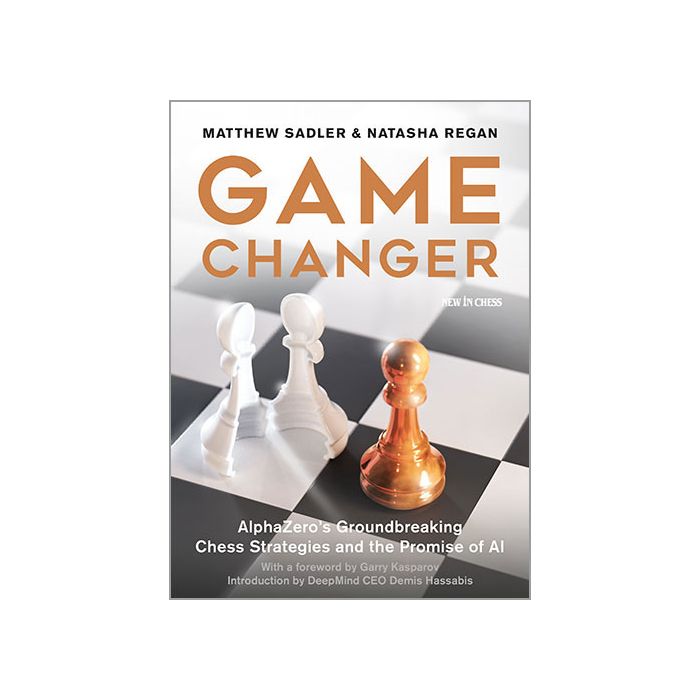 It took AlphaZero only a few hours of self-learning to become the chess player that shocked the world.

The artificial intelligence system, created by DeepMind, had been fed nothing but the rules of the Royal Game when it beat the world’s strongest chess engine in a prolonged match. The selection of ten games published in December 2017 created a worldwide sensation: how was it possible to play in such a brilliant and risky style and not lose a single game against an opponent of superhuman strength?

For Game Changer, Matthew Sadler and Natasha Regan investigated more than two thousand previously unpublished games by AlphaZero. They also had unparalleled access to its team of developers and were offered a unique look ‘under the bonnet’ to grasp the depth and breadth of AlphaZero’s search. Sadler and Regan reveal its thinking process and tell the story of the human motivation and the techniques that created AlphaZero.

The story of AlphaZero has a wider impact. Game Changer offers intriguing insights into the opportunities and horizons of Artificial Intelligence. Not just in solving games, but in providing solutions for a wide variety of challenges in society.

With a foreword by former World Chess Champion Garry Kasparov and an introduction by DeepMind CEO Demis Hassabis.

Matthew Sadler (1974) is a Grandmaster who twice won the British Championship and was awarded an individual Gold Medal at the 1996 Olympiad. He has authored several highly acclaimed books on chess and has been writing the famous ‘Sadler on Books’ column for New In Chess magazine for many years. Natasha Regan is a Women’s International Master from England who achieved a degree in mathematics from Cambridge University. Matthew Sadler and Natasha Regan won the English Chess Federation 2016 Book of the Award for their book Chess for Life.

Magnus Carlsen:
“Quite inspirational. I was thinking at several points during the game [in Round 11 of the 2019 Tata Steel Chess Tournament]: how would AlphaZero have approached this?”

Garry Kasparov:
“Chess has been shaken to its roots by AlphaZero.”

Steven Strogatz (professor of mathematics at Cornell), New York Times, December 26, 2018:
“Most unnerving was that AlphaZero seemed to express insight. It played like no computer ever has, intuitively and beautifully, with a romantic, attacking style.”

Grandmaster Raymond Keene, The Spectator:
“One of the most important chess books ever written.”

Grandmaster Daniel King on his YouTube channel:
“I absolutely love it. A fascinating read: provocative, inspiring, instructive and joyful. AlphaZero’s style is great fun, some of the things it is doing are incredible. This is just a great book.”

International Master John Bartholomew, on his YouTube Channel:
“I love Game Changer. This is a phenomenal book.”