64 bit Multiprocessor Version
Author
The ChessBase team
Out of stock 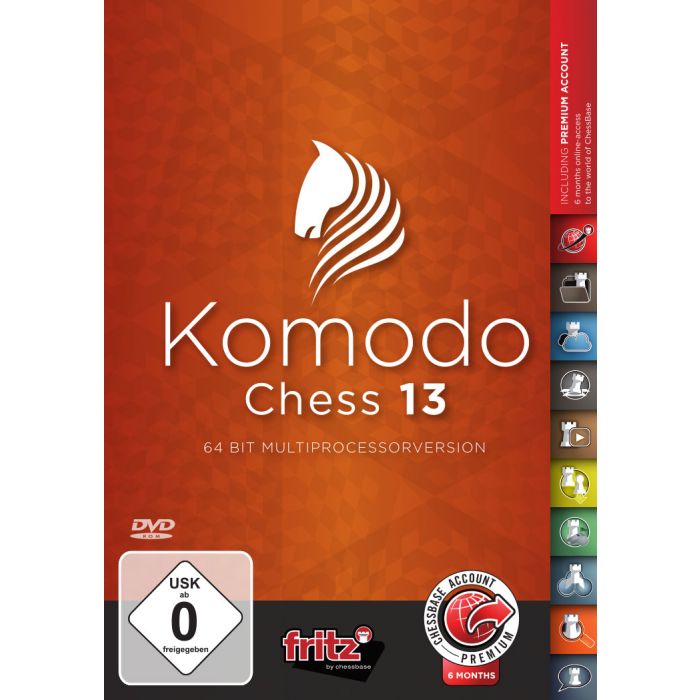 Komodo 13 thinks like no other chess program. Inspired by AlphaZero, Komodo developers GM Larry Kaufman and Mark Lefler have reinvented their engine from scratch over the last two years. The result speaks for itself: The new Komodo 13 MCTS ("Monte Carlo Tree Search") searches for candidate moves in an incredibly innovative way and finds solutions most engines never see!

Komodo 13 analyzes better than any other chess program. The development of the MCTS technology has paid off especially in combination with "multi-variation mode": In standard computers that have multiple CPUs, Komodo 13 MCTS is the world's best engine for analysing with two or more variations. In addition, Komodo 13 takes on a very human character. In balanced positions, where other engines evaluate as "0.00", Komodo looks more closely: The engine gives preference to the side that has the easier game, for instance, when the opponent must find a whole series of difficult moves to remain equal.

Komodo is a three-time computer world chess champion. Whether classical, rapid or blitz chess, in 2018 Komodo 12 won the Computer Chess World Championships in Stockholm, Sweden in all three disciplines. And Komodo 13 MCTS has significantly improved on multi-CPU systems!

Komodo 13: match winner and analysis partner. As with its predecessor, Komodo 13 comes with two versions of the engine: The standard version continues to be the first choice in the match play against other chess programs. The "MCTS" version, now improved by 350 Elo points compared to Komodo 12, is recommend for everyone interested in discovering variations and detecting mistakes together with Komodo 13.

Included on the DVD:

GM Boris Avrukh:
"I am deeply moved by the style of Komodo. In my opinion it‘s the perfect combination between computer accuracy and human positional understanding. I get the feeling it‘s taken positional understanding to the next level. After such an impressive performance I am going to test Komodo in my future work, especially in very positional play, and am really looking forward to working with it."