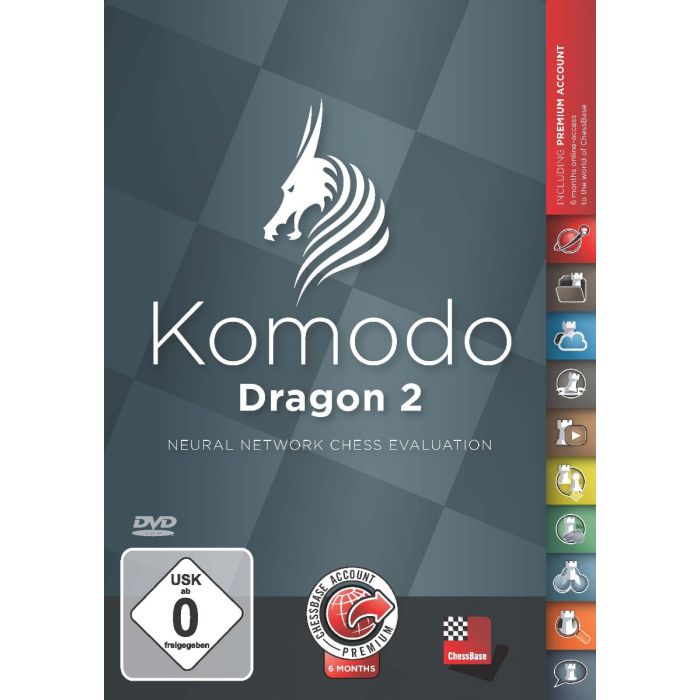 Komodo programmers GM Larry Kaufman and Mark Lefler recently decided to start over from scratch after Komodo 14. The step from the classic engine to the new "Dragon", which, like Fat Fritz 2.0, draws ist strength from a combination of a high-performance engine with a neural network, is quite fundamental. The network of Komodo Dragon 2 was trained with the help of countless ultra-fast games of the classic Komodo 14, which for a long time was the world's strongest engine for games with such short thinking times.

Komodo Dragon 2 thus has both excellent positional play - thanks to the neural network - and tremendous tactical power and computing speed, thanks to the classic Alpha Beta engine. It is a combination that pays off: compared to the double world champion Komodo 14, the developers were thus able to increase the playing strength of Komodo Dragon 2 once again by more than 200 ELO points! The first version of the "Dragon" is currently already one of the top three in the CCRL rating list (as of April 2021). However, the search function was still largely based on the settings of the old Komodo 14 engine. This has changed with "Dragon 2": in the new version, the search has been optimised based on evaluations stored in the neural network. It will be interesting to see whether Dragon can even outperform the competition as a result!

Komodo Dragon 2 comes with a number of engine variants. The standard version offers maximum playing strength. For analysis with multiple variations, on the other hand, the "MCTS" version is recommended. In addition, this version offers an exciting feature: you can have the move that offers the best chances from a practical point of view displayed in the analysis. The standard version, on the other hand, always expects the best possible play from the opponent, and that is therefore clearly the first choice, especially in correspondence chess. In addition, the engine can be switched to the variants "Attack", "Beginner", "Defence", "Endgame" in analysis and in the game.