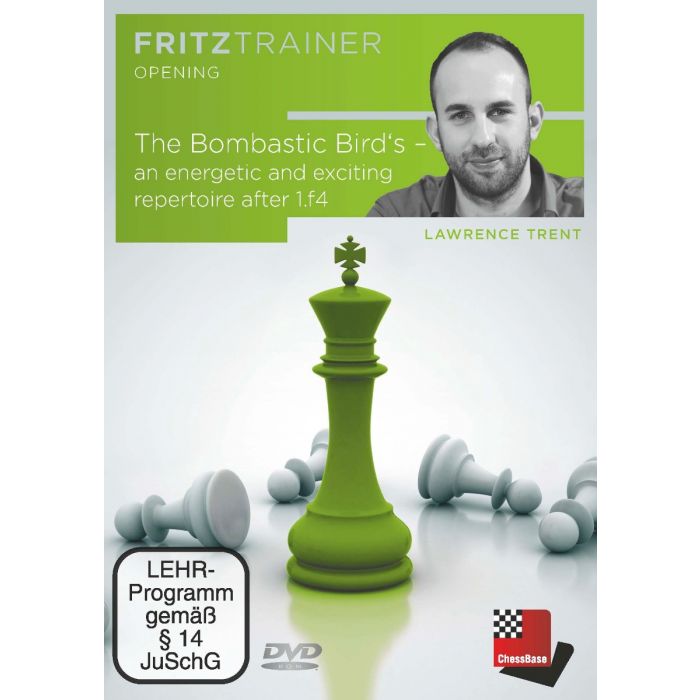 Over the years I have often heard Bird’s players (1.f4) labelled chess mavericks, “chancers”, too lazy to learn “proper” opening systems. Well, I am happy to say those days are well and truly over. Welcome to the “Bombastic Bird’s”, a revolutionary repertoire for one of the most enterprising and underrated openings in chess theory.

In this series, I uncover a number of groundbreaking theoretical novelties and new ideas that will soon have scorners of this romantic system regretting they ever doubted its soundness. Black will often try to refute White’s setup right from the word “go”, an attempt which often embarrassingly backfires and leads to a quick victory for the first player. Even World Champion Magnus Carlsen has taken a shine to the opening, joining a whole host of top grandmasters integrating it into their opening arsenals.

Born in 1986, Lawrence Trent is an international master, who has represented England in numerous international youth championships (including a 7th place in the U18 WCh in 2003). The Londoner, who has a degree in Romance languages, already has a lot of experience as a trainer. Trent has recorded several DVDs and 60-minutes videos for ChessBase. Trent also demonstrated his ability as a commentator on live chess at numerous tournaments such as the London Chess Classic, where he commented on the games of Carlsen, Kramnik and Co. both for the public in the hall and on Playchess.