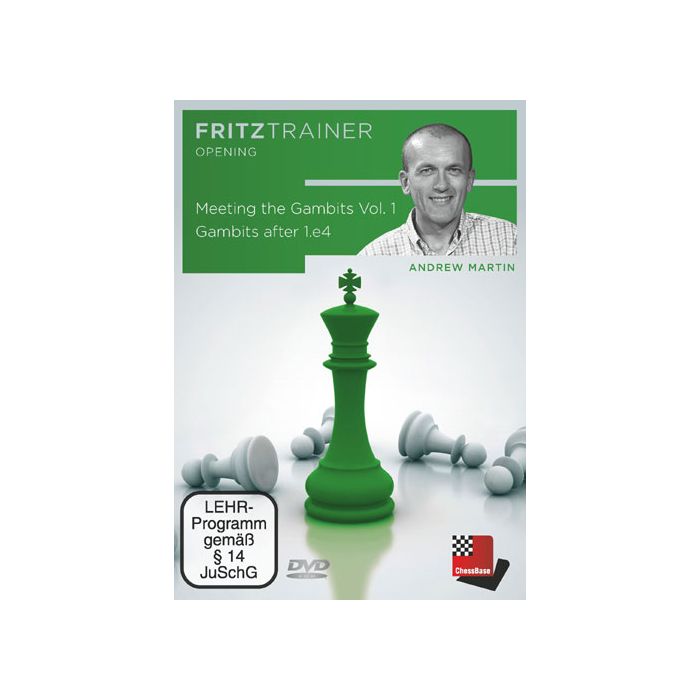 Despite the advances in computing power, gambit play is still very common, especially among young players, club players and improvers, and it is wise to learn how to defend against these dangerous ideas. You do not want to be wiped out in the opening!

On Meeting the Gambits Vol. 1 - Gambits after 1.e4, FIDE Senior Trainer Andrew Martin provides you with an excellent selection of repertoire choices and teaches you the right approach to take against gambiteers.
Do not let them have their way! You may see this as a course in defensive and counterattacking technique.

The gambits covered on this DVD are:

In other words, all the main line gambits after 1.e4 that commonly feature in practical play.
Gambits must be given full respect, but not feared. If you learn from and employ the suggestions presented here, you will win more games.

Andrew Martin is an English chess player with the title of International Master.
He has won various national and international tournaments and was a commentator on the chess world championship between Kasparov and Kramnik in 2000.
He is known as a professional chess teacher and head trainer of the English youth team.
He is a chess columnist, an author of chess books and the author of various instructional videos.
He was the publisher of the series Trends Publications.
Andrew Martin has recorded extensively for Chessbase since 2004.