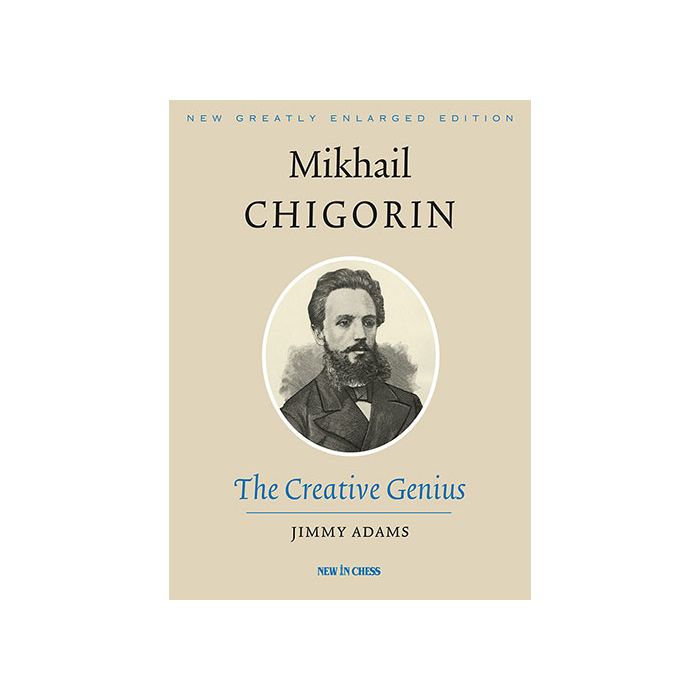 About / Mikhail Chigorin, the Creative Genius

Mikhail Chigorin (1850-1908), the father of modern Russian chess, belongs to that select group of exceptionally strong players who never succeeded in winning the World Championship. The defining moment for Chigorin came when he blundered away a winning position in the final game of his second title match against Steinitz.

This book provides a vivid account of the life and times of Mikhail Ivanovich Chigorin: his rise to chess fame after a difficult childhood, his unfaltering commitment to the promotion of the game in 19th-century Russia, his friends and enemies, and his chess exploits in many countries.

Today Chigorin’s contributions to opening theory remain significant. He was the finest gambit player of his generation, but it is his pioneering work in the Ruy Lopez, the Queen’s Gambit as well as various King’s Indian formations that has been the most enduring.

Mikhail Chigorin, the Creative Genius is a hugely expanded second edition of the games collection published in 1987 (which had only 292 pages). The biographical material, telling the story of Chigorin’s turbulent chess career, now runs to hundreds of pages. Furthermore, 100 extra games have been added, annotated by Chigorin and his contemporaries or more modern grandmasters.

FIDE Master Jimmy Adams is a prolific chess author, who has written, translated and compiled a wide range of books on openings, historical tournaments and legendary players. From 1991 to 2010 he was the editor of the English magazine CHESS.

GM Raymond Keene, The Times:
"A stupendous new book, one of those rare events that represent milestones in chess publishing history."

Sean Marsh, CHESS Magazine(UK):
"The game annotations are a real treat, especially when a number of sources are quoted within a single game (..) I was very familiar with Chigorin the gambiteer, but it was only after reading this book I became fully aware of his terrific endgame skill (..) One of the best parts of the book comes at the very end, in the form of 'Reminiscences of Chigorin's Daughter'. The document paints a vivid picture of her father and his eccentricities, and it is chess gold dust (..) It is hard to see how this book could be improved. To call it a new edition of the earlier book on Chigorin doesn't begin to tell the story of just how much extra material has been included."

Fred Wilson, author of '100 Questions on How to Play Chess':
“A superbly researched biography on Russia’s greatest 19th century player.”

Florian Jacobs, Max Euwe Centre Amsterdam:
"A book that reads extremely well (..) A first-rate chess biography for which we must thank the publisher: finally a big book about Chigorin!"

IM Gary Lane, Chess Moves Magazine:
"A compelling read because Chigorin's story is so amazing with links to poverty, glory and fame."