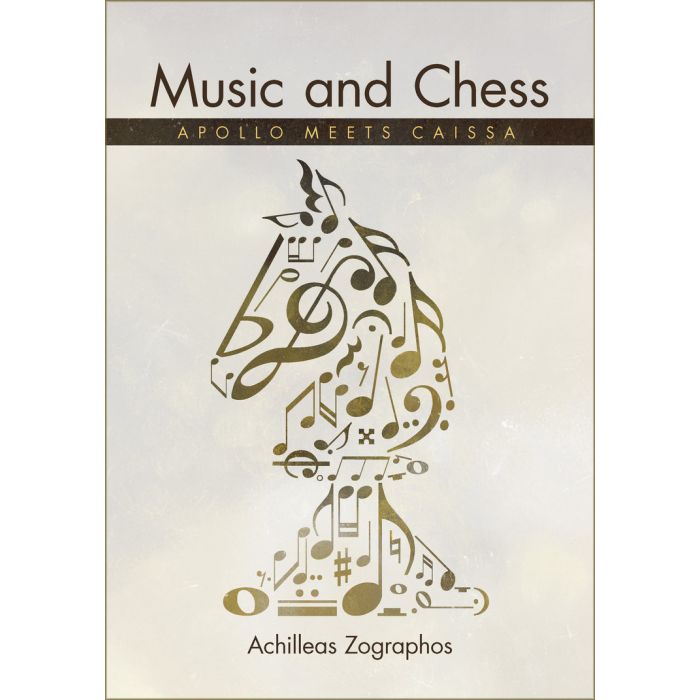 A Most Fascinating Journey!

It has long been recognized that there are only three major areas of human endeavor which produce prodigies: music, chess and mathematics. This does not occur by happenstance. There are links on many levels. Now, for the first time, Music and Chess – Apollo Meets Caissa examines the yet unexplored relation of chess to music. Mathematics is a main common denominator, a fact that is highlighted accordingly.

The thesis of this extraordinarily researched book is that chess is art in itself. It can create art and is strongly related to mathematics and music. As becomes clear, this relationship has already been introduced by some legendary players such as Mikhail Tal and Vladimir Kramnik.

Great artists such as John Cage, Marcel Duchamp and Arnold Schönberg, to name but a few, have also been fascinated by the very same idea. Surprisingly, this has not been explored in detail so far – only some sporadic articles exist, by authors specializing in either music or chess.

There are chapters that address issues which are specialized in chess and music, while others cover related issues of general, social and artistic nature. Music and Chess – Apollo Meets Caissa can be appreciated by readers who have a good, general, though non-specific background, in both fields. That is, no technical knowledge of music is required, with the only prerequisite to fully appreciate the text being the understanding of standard chess rules. The text could be equally enlightening to students of music or mathematics, as an added intellectual insight into these two disciplines.

The text is supplemented by many chess diagrams, charts, and over 50 full-color images. So, turn on the music, set up the chessboard, get out the calculator and let the author take you on the most fascinating journey that is Music and Chess –Apollo Meets Caissa.

After completing his music studies in Greece, Achilleas Zographos pursued postgraduate studies in Germany, at the Folkwang University of the Arts, Essen with a major in piano performance. He has given piano recitals in Germany, Greece and Taiwan and authored the handbook Σκ?ψεις και προτ?σεις στη μουσικ? πρακτικ? (Reflections and Proposals in the Practice of Music; online: Σκ?ψεις και προτ?σεις στη μουσικ? πρακτικ? | Public.) Articles by him, including those which are chess-centered, have also appeared in the established music journal Classical Music Review.

Achilleas is also a certified chess trainer (FI) from the International Chess Federation (FIDE). At his peak, an Elo rating of 2204 was good enough to place him among the top 100 Greek players. He tied for first place in the SMAOK Tournaments of both 2009 and 2010, with Elo performances above 2400. With his team, SO Ambelokipon, he won the 2014 Attica Blitz Chess Team Championship.

He has been teaching music and chess at the State Music School of Pallini, Athens,Greece since 1998. Under his guidance, his students have explored the affinities of chess with other arts and music in particular.