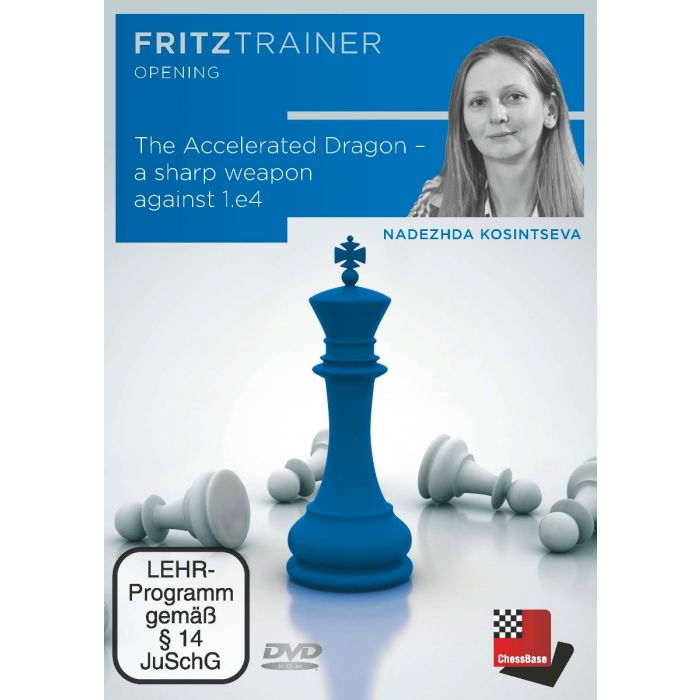 After 1.e4 c5 2.Nf3 Nc6 3.d4 cxd4 4.Nxd4 g6! leads to the so-called “Accelerated Dragon Defense” of the Sicilian, which is characterised by the idea to achieve the thematic central break d7-d5 in one move (in contrast to the “Dragon Variation”, in which Black plays d7-d6).

On this DVD the Russian grandmaster and top women player Nadezhda Kosintseva reveals the secrets of her favourite opening. Kosintseva has played the Accelerated Dragon for many years and achieved a lot of success with it.

You too can accelerate your opening – with this complete repertoire for Black against 1.e4! On move five White has basically two continuations. First, 5.c4 – the popular Maroczy system, against which Kosintseva has a number of strong recommendation in store. Second, the “Open  Variation” 5.Nc3, against which the grandmaster offers no less than two promising systems: the modern dynamic treatment with a quick d7-d5, which is a firm part of the repertoire of top grandmaster Boris Gelfand from Israel, who employed this line successfully on a number of occasions in 2017 which made it very popular. And the quieter, strategic approach with …d6 and … Qa5, which gives the game an entirely different character.

Kosintseva explains the theoretical main lines and side lines of the Accelerated Dragon, but also the many strategic finesses of this opening with its typical plans and pawn breaks (such as d7-d5 and b7-b5), and of course she also shows clever tactical stratagems such as the classical Sicilian exchange sacrifice ...Rxc3 followed by ...Nxe4. The material learnt can be practised with interactive tasks with video feedback which makes you fit for the practical game – and helps you to make your opponent sweat!

Yannick Pelletier: A Classical Guide to the French Defence