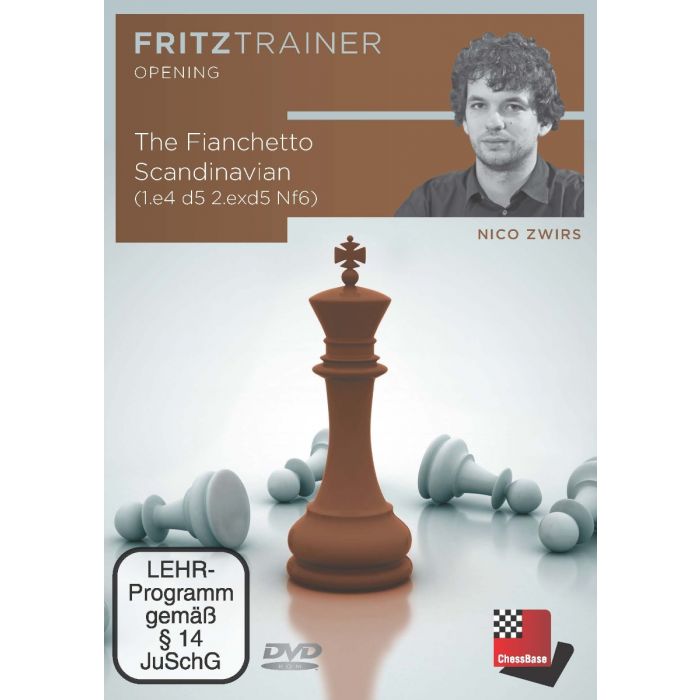 The Scandinavian is one of the most direct approaches against 1.e4. Right from the first move Black is attacking White’s centre.

A lot of players, especially club players, don’t like to face this line because of this aggressive character. Most of them flee into offbeat lines which are not very critical. The ones who dare to go for the mainlines need to remember a lot of lines.

This makes the Scandinavian a perfect choice for your repertoire.

In the Fianchetto Scandinavian Dutch IM Nico Zwirs will share his experience with the love of his youth. The DVD will begin with an introduction, followed by starting with the main lines.

The Fianchetto Scandinavian is characterised by the …g6 …Bg7 setup. From there on, Black will attack the centre, just as in the Grünfeld Defence.

Where it is possible, Zwirs will fianchetto his bishop and explain the ideas. The plus side of this setup is that Black players are able to learn the repertoire by heart very easily.

Of course, there are some cases where Black can’t fianchetto his bishop and in those lines Zwirs explains why it’s not a good idea and what the alternative is.  Also, the viewer will learn about the dynamics of the opening.

Normally one of the sides is going all out and sacrifices material or his pawn structure. In those cases it’s important to know if you have to go all out or sit tight.

In the end there is a bonus chapter where all the choices are explained, especially the reason why the repertoire isn’t constructed around the Portuguese Gambit is interesting. This DVD is a must have for Scandinavian players or players looking for a new and creative opening.

Nico Zwirs is a Dutch International Master living in Amsterdam, who grew up in Apeldoorn. He got the IM title in 2019, reaching a peak rating of 2453. He’s an active player, participating in several European leagues.