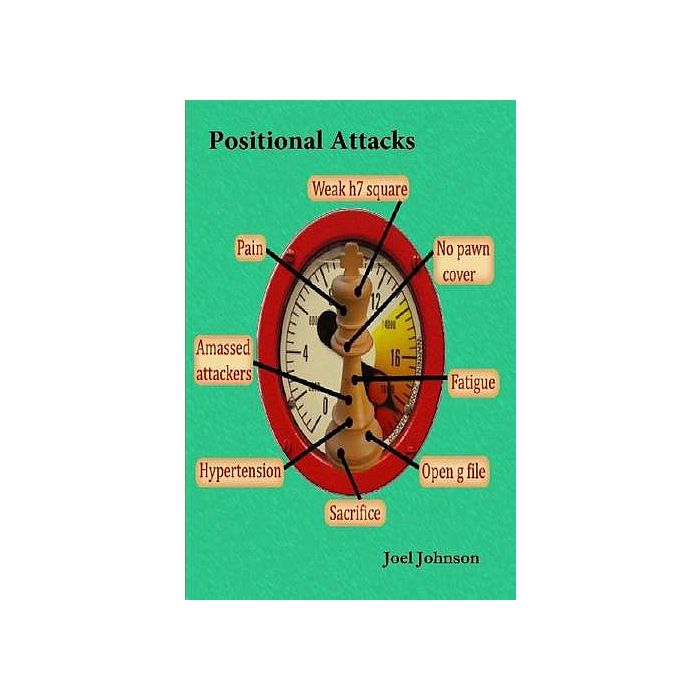 The third instalment of the best-selling series of attack books - Formation Attacks, Formation Attack Strategies, and now, Positional Attacks is another 500 page book, full of great attack information with 532 fabulous attack games from all openings and all eras.

The aim of Positional Attacks is to uncover the artistic side of attacking, one that is primarily centered on the creation and exploitation of weaknesses. Oh sure, there will be tactics; after all they cannot be avoided in chess - nor would we want to exclude them.

But there is nothing quite like witnessing chess masters dissect their opponents with smooth, elegant, aggressive, positional attacking manoeuvres.

And, once again, the games provided in the book came from an in-depth global search for unique, inspirational, and original attacks from some of the world’s greatest attackers. Many of them toil in remote areas of the planet and have only a local following.

Joel Johnson earned the National Master title in 1978 and later the Life Master title. Joel is a tactical chess player that has won many chess tournaments during his roughly thirty-five years of playing chess at Master Level.

In 2007, he won the U.S. Senior Chess Championship. Joel was an award winning Editor of "Chess Horizons", the official state chess magazine for the state of Massachusetts and is a past Games Editor for the magazine.


Life Master Brian Wall, Thornton, CO, seven time Colorado State Champion:
"Joel explains things so simply and thoroughly that total beginners are whipping out GM attacking games in no time. I have never seen any chess coach create so many scary tournament players from scratch. One method is watching them play blitz games with attack openings and then coaching them to play sharper. It's a remarkably powerful method."

Life Master Steve Mayer, Gilbert, AZ:
" This is yet another expansion of Johnson's series on attacking the king. (..) There are well over 500 games included in this 500 page book and I can practically guarantee you that that you will have seen very few- if any- of them before. (..) Ultimately, Johnson's series aims to awaken or improve the inner Tal that chess players of all ages and ability levels have."