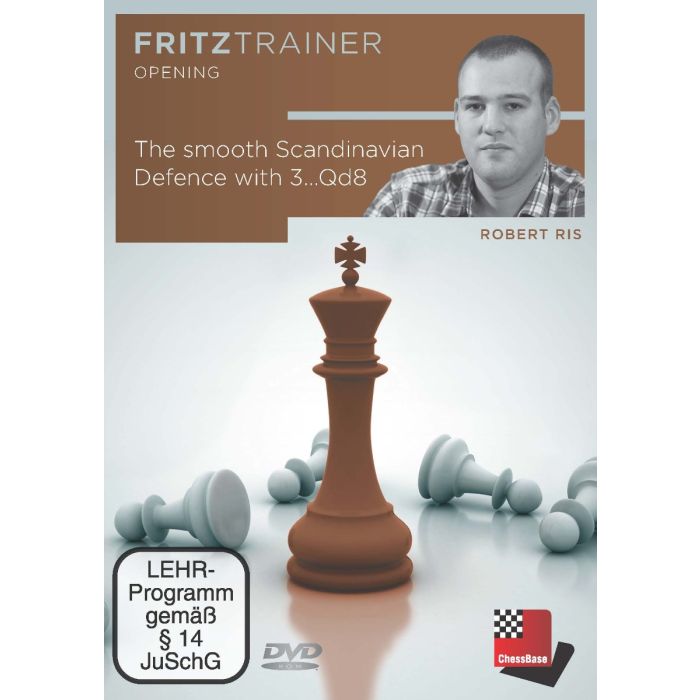 Are you looking for a simple, easy-to-learn repertoire against 1.e4? Then the Scandinavian with 3…Qd8 is yours!

After 1.e4 d5 2.exd5 Qxd5 3.Nc3 the retreat 3…Qd8 leads to a very solid type position for Black. At the expense of two tempi, the pawn structure has been defined, and hence a clear developing plan can be made for our minor pieces.

The first goal is to get the light-squared bishop out to g4, then placing the pawns on c6 and e6. Now Black has a rock-solid setup and good chances to build up pressure against White’s pawn on d4 and/or use the d5-square as an outpost for any of their pieces.

This video course offers you a complete Black repertoire with 1.e4 d5. Covering all the critical attempts for White to punish Black’s provocative approach, as well as all the relevant minor options on move 2 and 3 for White. The emphasis is on understanding the ensuing middlegames and endgames.

In the interactive part (20 exercises with multiple questions) you’ll get a chance to apply some concrete theoretical knowledge, as well as test your understanding of typical positions arising from this opening. After studying all the material, you will likely get a position that you are more familiar with than your opponent!

The 3...Qd8 Scandinavian - Simple and Strong