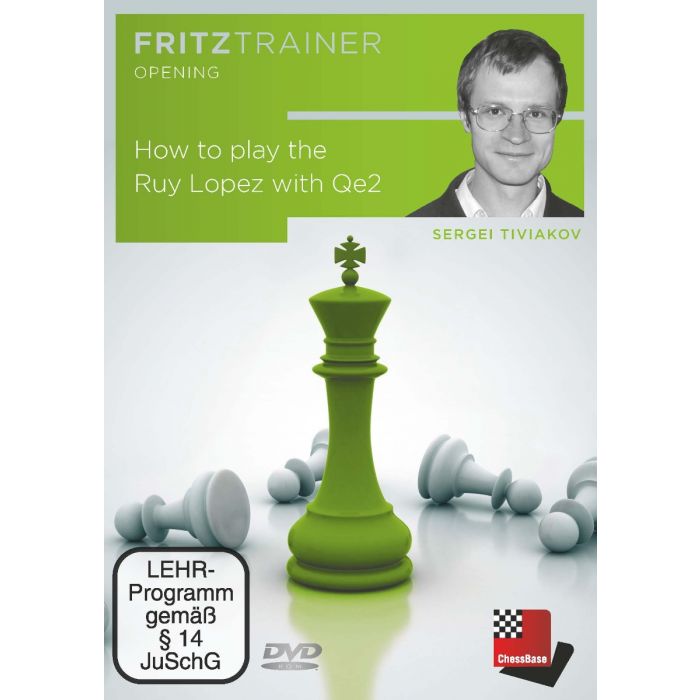 To avoid theory battles in well-known lines against Ruy Lopez (Berlin, Open Variation or the Marshall Attack), Sergey Tiviakov invites you into the world of an extraordinary early queen move for White: Qe2 – elegant, effective and easy to learn!

Sergey Tiviakov himself has employed his pet line, the development of the white queen to e2, since the age of 6 – this means 40 years of experience, transferred into 5 hours of video! The DVD is based mostly on Tiviakov’s own games and his life-long experience with Qe2 in the Ruy Lopez. Studying the rich material, you will be able to lead your opponent into unknown territory for him, with good chances to score just as successfully as the author himself!

Born 1973 in Krasnodar (Soviet Union), Sergei Tiviakov was a member of the Smyslov school and gained the titles of World Youth Champion at U16 and U18 levels. 1994 He represented Russia in the Chess Olympiads. Since 1997 Tiviakov has been living in Groningen (Netherlands). With his new home country he won the title in the European Teams Championships in both 2001 and 2005 and was victorious in the championship of the Netherlands in 2006 and 2007. Tiviakov celebrated his biggest success in 2008 when he won the European Individual Chess Championship.