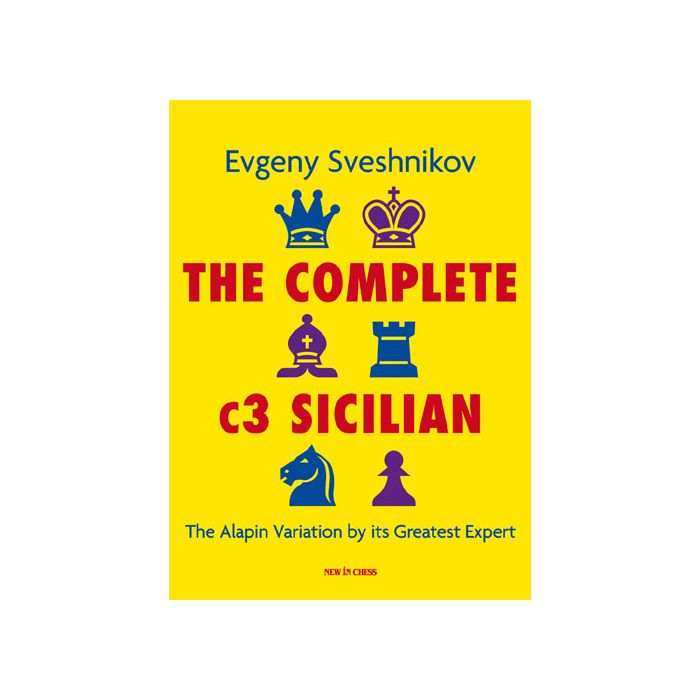 It is not difficult to understand why the Alapin Sicilian is such a popular opening with amateur and professional chess players all over the world. Against Black’s most dangerous reply to 1.e4 it simply offers everything you need if you are looking for a reliable scheme that does not take much time to learn.

It could even be argued that 2.c3 is the most logical response to the Sicilian Defence. White aims at creating a strong pawn centre and obtains an easily manageable middlegame. Meanwhile:

The Complete c3 Sicilian brings you the basic ideas, the plans, the tactical tricks and the latest developments from recent grandmaster practice. With hundreds of games, accessibly explained, and many tests, it contains as a special feature a listing of ‘opening catastrophes’ to be avoided or exploited.

Universally recognized as the world’s greatest Alapin expert, Evgeny Sveshnikov has written the most comprehensive guide ever: a well-structured book, indispensable for masters and yet easily accessible for club players.

Evgeny Sveshnikov is an active international player who currently represents Latvia. The Russian Grandmaster is a former trainer of Anatoly Karpov and one of the most respected opening experts in the world.

He has played more than 600 c3 Sicilians with a score of over 70%, including dozens of wins against well-known grandmasters like Mikhail Tal, Sergey Tiviakov and Judit Polgar.

Carsten Hansen, ChessCafe:
"It is by far the best book ever written on this opening. Beyond that, it teaches a bundle of things about chess in general."

Martin Rieger, Europa Rochade:
"A monument in opening literature! About 2.c3 you will not find anything more complete or better."

Glenn Flear, Yearbook:
"Despite its bulk, the result is a delightfully entertaining and instructive book that can be appreciated by all."

Joe Petrolito, Australasian Chess Magazine:
"A labour of love from the world's foremost authority on this opening (..) A superb book."

Simen Agdestein, VG Daily:
"It is wonderful to see Evgeny Sveshnikov's classical approach. This book is indeed complete, in a time when most people expect only computers to be complete."

Marshtower Chess Reviews:
"This is a very good book and one that makes me want to play what the author suggests."

Arne Moll, ChessVibes:
"Sveshnikov gives hundreds of illustrative games played with the c3 Sicilian, often heavily analysed not only in the opening and middlegame but also deep into the endgame."

Hans Groffen, Provinciale Zeeuwse Courant:
"No long opening variations here, but chiefly a lot of explanation by way of games. It is in fact more a middlegame and endgame book, which makes it also interesting for those who don't play this opening."

Max Euwe Centre, Amsterdam:
"Indispensable for everyone who plays the Alapin variation or who wants to get armed against it."