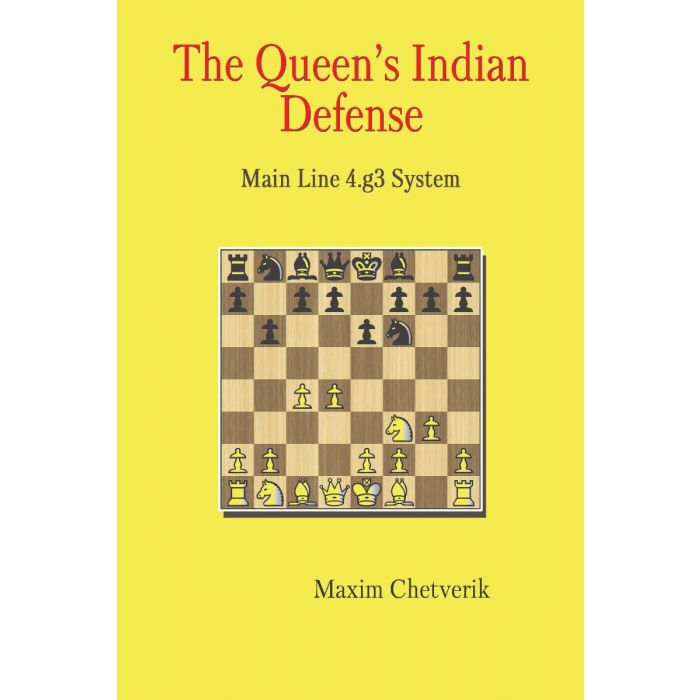 International Master Maxim Chetverik has written an in-depth study of one of the most popular choices by white in the Queen’s Indian Defense – the main line with 4.g3, where white fianchettoes his bishop. This line is often seen at top-level chess.

A key focus of this work is an examination of new lines that have recently appeared in the arsenal of grandmasters. The full range of continuations for both white and black are covered in this textbook, including hybrids with the Bogo-Indian Defense and certain Catalan, Dutch, Benoni and Hedgehog-type set-ups, as well as key themes such as hanging pawns, the isolated queen’s pawn, white’s four versus three ranks advantage, the closed center with the pawn structure being c4­-d5-­e4 against c5 (c7)-­d6­-e5 and structures with semi-open files, making it an essential and comprehensive guide for players on both sides of the board in this variation.

Maxim makes this book particularly user-friendly by his focus on learning the key ideas through practical games, as well as his use of “land-mines”, transposition alerts and key tips.

This book contains 181 full games in this line and several hundred fragments with detailed and original commentary by the author focused throughout on giving a balanced evaluation in what are complicated positions. Many of these games feature the world’s greatest players, including world champions Carlsen, Anand, Kramnik, Kasparov, Karpov, Spassky, Petrosian, Tal, Smyslov, Botvinnik and Alekhine, and other top players including Caruana, Shankland, Nakamura, So, Mamedyarov, Aronian, Grischuk, Ivanchuk, Karjakin, Harikrishna, Adams, Shirov, Gelfand, Topalov, Korchnoi and Timman.

Maxim himself has played over 100 official games in this line, making him a leading expert in the Queen’s Indian Defense in general and the 4.g3 line in particular. Four of his games are in included in full in this volume, as well as a number of fragments.