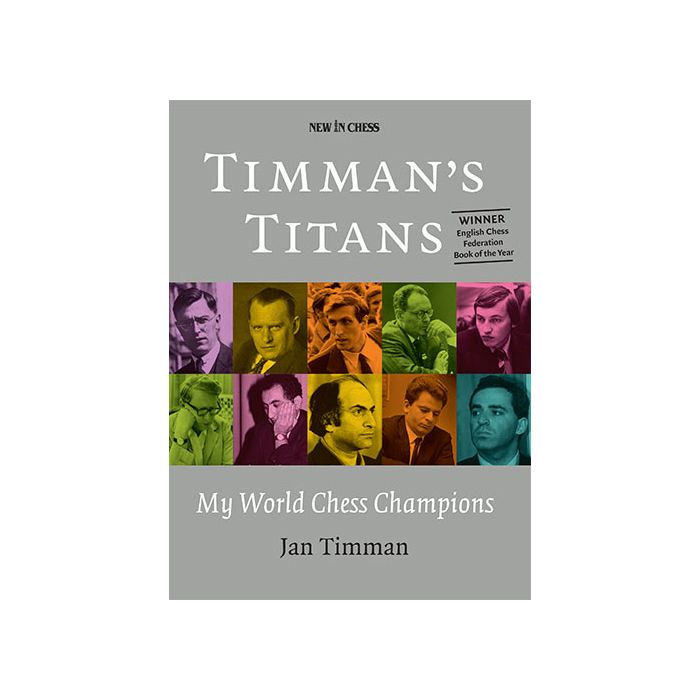 For many years Jan Timman was one of the best chess players in the world. He combined his brilliant successes on the board with a passion for writing and meticulously analysing his own games and those of his rivals. Three times he was a World Championship Candidate and in 1993 he played in the final of the FIDE World Championship.

In this fascinating book, Jan Timman portrays ten World Chess Champions that played an important role in his life and career. Alexander Alekhine (1892-1946) he never met, but the story of how in Lisbon he bought one of the last chess sets belonging to the fourth World Champion is one of many highlights in this book.

Timman has a keen eye for detail and a fabulous memory, and he visibly enjoys sharing his insider views, including many revelations about the great champions. Timman’s Titans not only presents a personal view of these chess giants, but is also an evocation of countless fascinating episodes in chess history.

Each portrait is completed by a rich selection of illustrative games, annotated in the author’s trademark lucid style. Always to the point, sharp and with crystal-clear explanations, Timman shows the highs and lows from the games of the champions, including the most memorable games he himself played against them.

Jan Timman is a former world championship candidate who rose to the number two spot of the FIDE world rankings. He is the author of several highly acclaimed bestsellers, such as 'Curacao 1962', 'On the Attack!', 'Power Chess with Pieces' and 'The Art of the Endgame'.

From the Judges’ Report of the ECF Book of the Year:
“What lifts this book is Timman’s affectionate, intimate descriptions of the personalities of the world champions. The book must be read to obtain the full flavour of Timman’s writing. It is by no means all reverential.  Timman can  be sharp (Fischer’s later life, Kasparov’s chess politics); but also compassionate, despairing of Tal’s bohemian life style (..) Timman’s Titans is the most informative, interesting and revealing book on the world champions covered, both as people and chess players.”

IM Jeroen Bosch, Schaakmagazine:
"One of the finest chessbooks that have recently been published (..) Although Timman doesn't keep silent about matters such as matchfixing, abuse of power or excessive drinking, he writes his portraits with a fundamentally positive view."

John Henderson, First Move:
“Brim full of insight, anecdotes, and well-annotated games that we’ve come to normally expect from the living legend. This is a smorgasbord of a book that will easily keep the reader amazed, entertained and thoroughly enthralled from cover to cover.”

Magnus Carlsen on reading Timman’s Titans:
"It was very inspiring to relive some of the great ideas from the past"

B.H.Wilders, Nederlands Dagblad:
"The many anecdotes will changes the views of quite a few readers (..) A classic."

Uwe Bekemann, German Correspondence Chess Federation:
"Even chess insiders will find in the stories a lot of information they don't know (..) I have always been a fan of Timman's way of annotating games. He makes what happens on the board very easily accessible, so much so that you feel yourself fully immersed in the secrets of the game."