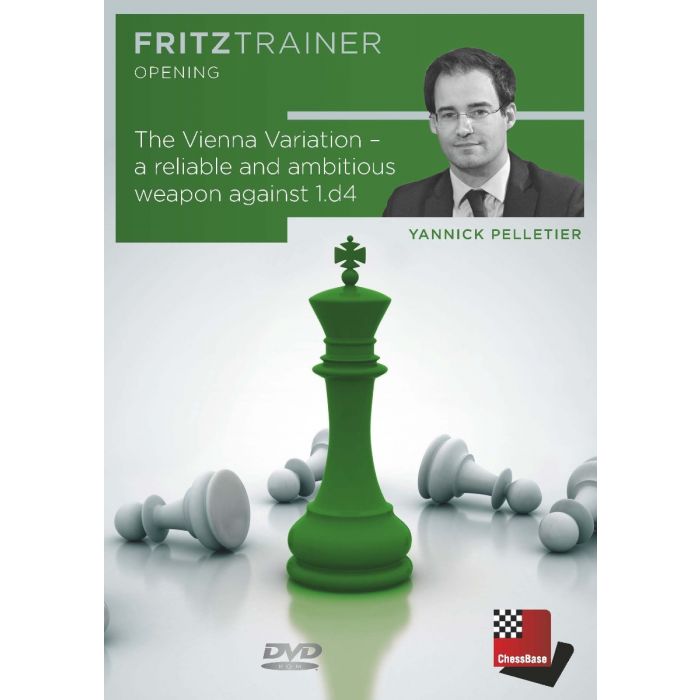 The Vienna Variation is a particular and independent system of the Queen’s Gambit. It arises after 1.d4 d5 2.c4 e6 3.Nf3 Nf6 4.Nc3 dxc4, when black’s capture on move 4 is strongly reminiscent of the Queen’s Gambit Accepted. But the Vienna Variation is also inspired by Nimzo-Indian structures while keeping its own character. The main variations usually lead to asymmetrical pawn structures, where Black can hope to get a fighting game.

The Vienna Variation requires precise theoretical knowledge. No wonder it is regularly employed by top players such as Vladimir Kramnik and Levon Aronian. GM Yannick Pelletier offers you a complete repertoire in the Vienna, while covering the numerous possible deviations by White. He also analyses thematic games which illustrate the most important middlegame ideas.

This is an interactive DVD. In the test section, Gandmaster Pelletier pauses and asks you to find and play the best move. He then gives feedback to your chosen move. The database with illustrative games will also help you understand and play the Vienna Variation better. The author has selected all games in the database carefully and annotated many of them.

Born in 1976 Yannick Pelletier is a Grandmaster and a chess professional. He’s a regular member of the Swiss national team and a six-time Swiss Champion (1995, 2000, 2002, 2010, 2014 and 2017). He won several open tournaments throughout his career and in 2015 beat Nakamura and a month later the reigning World Champion Magnus Carlsen in tournament games. Yannick Pelletier also organises the Biel Chess Festival and is known on the chess circuit as a lively commentator. He’s fluent in five languages (French, German, English, Spanish and Russian).