Jennifer Yu: Lady with a Torch
Author
ACM
Out of stock 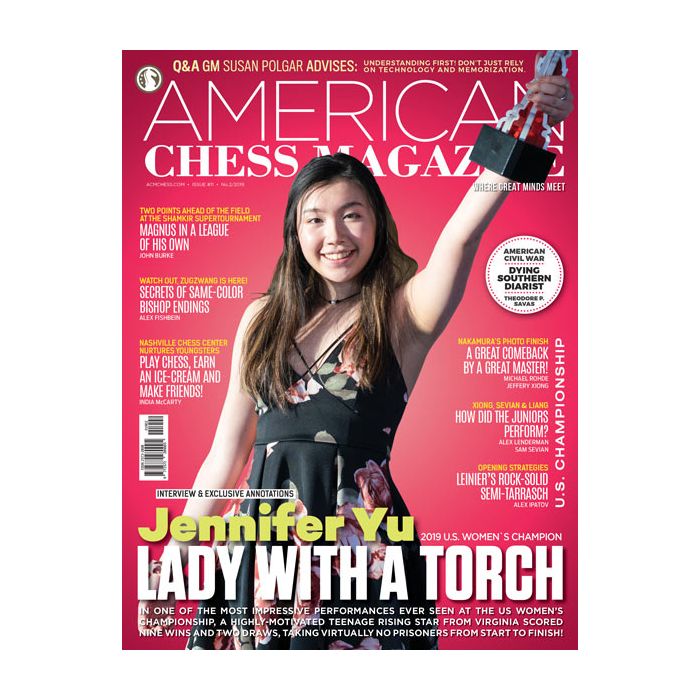 About / American Chess Magazine no. 11

A photo of 17-year-old Jennifer Yu shines brightly on the front cover of ACM #11 after an amazing performance that led to her being crowned as the 2019 U.S. Women’s Champion. Exclusively for ACM, Jennifer annotates two of her key Championship games and talks about her chess career.

Annotations by GM Michael Rohde and GM Jeffery Xiong direct the spotlight on the U.S. Men’s Championship and Hikaru Nakamura’s win in a photo finish, while GM Alex Ipatov examines opening strategies adopted by Nakamura and Dominguez who were both in contention for the title until the very end.

The performances of U.S. juniors both at the U.S. Championships and the World Team Championships are also on full display with game commentaries by GMs Xiong and Sevian, as well as a special overview by National Team Coach GM Alex Lenderman.

In order to unravel the secrets behind Magnus Carlsen’s extraordinary performance at the very strong Gashimov Memorial in Shamkir, GM John Burke draws pertinent conclusions from the World Champion’s hat trick of victories in super-tournaments this year.

Among our regular contributors, GM Joel Benjamin shares his views on the present state of U.S. chess, GM Jacob Aagaard challenges readers with a new set of positions for solving in his All-Round Training column, GM Alex Fishbein explains in detail the characteristic zugzwang positions in same-color bishop endings, IM Boroljub Zlatanovic showcases the beauties of underpromotion of pawns. Pete Tamburro offers his selection of fabulous finishes in queen and pawn vs. queen endgames, while Jon Edwards emphasizes the importance of appreciating correspondence games when carrying out opening preparation.

A local story is told by student journalist India McCarty, who conveys the atmosphere when she personally witnessed amusing episodes at the Nashville Chess Center. Another local story, narrated by Theodore P.Savas, goes back to the years of the American Civil War when playing chess was the only pleasure in life for a dying Southern diarist, LeRoy Wiley Gresham.

As usual there are tournament reports, book reviews by FM Carsten Hansen and a very special guest in our 5x5 Questions and Answers column: the first woman in history to earn the Grandmaster title, Olympic and World Chess Champion GM Susan Polgar.