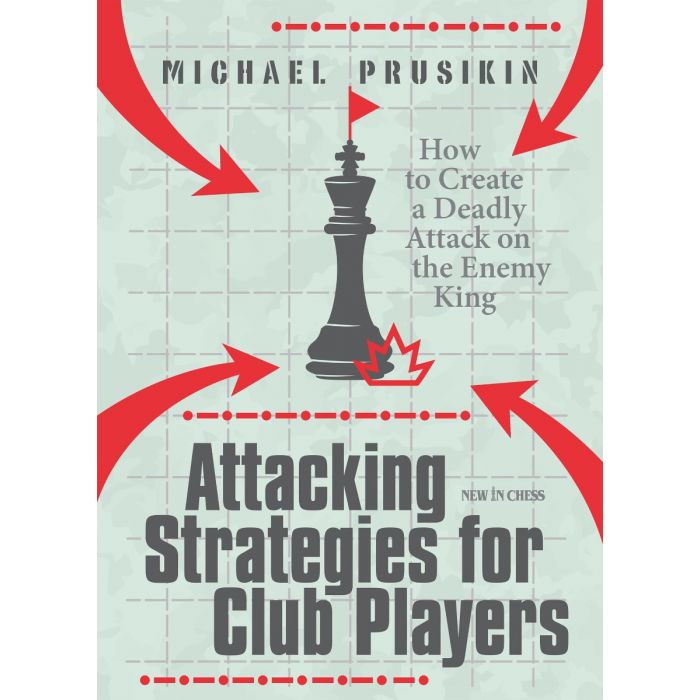 Attacking your opponent’s king is not just a shortcut to victory,  it’s also one of the most enjoyable and gratifying experiences in chess. If you want to win more games you should become a better attacker. Studying typical attacking motifs and ideas easily brings dividends while you are having a good time.

Michael Prusikin presents the prerequisites and the rules for a King attack in a lucid and attractive manner. In 15 thematic chapters he teaches you how to assess the nature of the position, identify the appropriate offensive patterns, find the preliminary moves and conduct your attack in a clear and effective way.

Battering rams, obstructive sacrifices, pawn storms, striking at the castled position, sacrificing a knight on f5, Prusikin demonstrates the most important patterns of attack with lots of clear and well chosen examples.

Next, Prusikin tests your newly acquired insights and your attacking intuition with exercises covering all the themes and motifs. You will find that studying Attacking Strategies for Club Players is both entertaining and rewarding.

Michael Prusikin is an International Grandmaster and a FIDE Senior Trainer from Germany. In 2009 he was the co-winner of the German Championship. Several times he has been voted German Chess Trainer of the Year. He writes the tactics column in the German magazine SCHACH.

“The vast majority of attacking patterns are presented with strikingly clear logic. Any reader who studies this book, almost irrespective of their playing strength, will come away with new ideas for conducting an attack on the king in particular and about chess understanding in general.”
Alexander Khalifman, former FIDE World Champion

“The examples are well-chosen and fresh, not positions you have seen many times before. Every player with a rating between 1500 and 2300 will benefit.” Alexander Hilverda, SCHACH Magazine

“How to conduct an attack has only rarely been explained and presented in a way that is really beneficial to readers who wish to improve. This book is different: Prusikin demonstrates very effectively which are the prerequisites for a successful attack on the enemy king and the best way to pull it off. Well done and very helpful.” Ulrich Sperber, Chess International