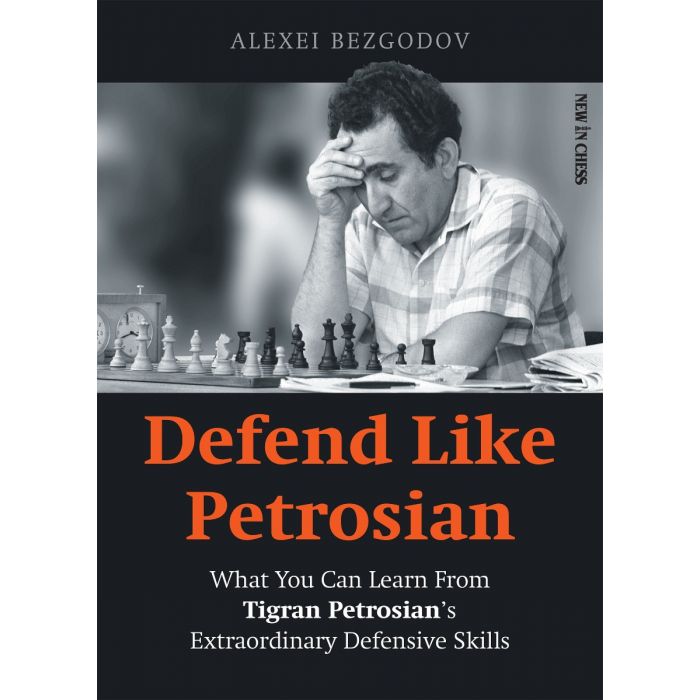 Only the very best dared to play for a win against Tigran Petrosian. The 9th World Champion was extremely difficult to beat because his defensive techniques were virtually unmatched. In the rare case that someone managed to bring him into difficulties they ran a serious risk of having to face a vicious counterattack.

Former Russian Champion Alexey Bezgodov explains to a wide range of players how they can employ the skills of ‘the Tiger’. How to deal with pressure, how to anticipate threats or march your king out of danger even if it feels you are entering a minefield. That you should not hesitate to give up an exchange or spoil your own pawn structure if the position calls for it. How to find unlikely decoys and start a counterattack. Contrary to what many chess fans think, the Armenian genius was a highly dynamic defender!

This book aims to help amateur players improve the standard of their defensive play. In many training programs, a serious analysis of the art of defence is lacking. That explains why most club players are much better at attacking than at coping with adversity and difficult positions. Defend Like Petrosian points the way to creative solutions and will help you save lots of points.

Alexey Bezgodov is a former Russian Champion. He is the author of The Extreme Caro-Kann, The Liberated Bishop Defence, The Double Queen’s Gambit, and The Art of the Tarrasch Defence, four highly original and acclaimed opening books.

“An excellent selection of 176 annotated games. Out of these, 78 form an overview of Petrosian’s career with an emphasis on Petrosian’s defense; the rest are organized in 14 chapters, each featuring one of his best-known opponents, including Botvinnik, Tal, Spassky, Karpov, and the best players from the 1950s through the early 1980s. Petrosian didn’t shy away from taking risks. He would make surprising and even objectively inferior moves, but ones that confused his opponents, in order to create problems. Botvinnik is quoted as saying that he was unable to anticipate Petrosian’s moves, and I think that must have been true for most of his opponents. Another factor that has influenced Petrosian’s image is that, for a World Champion, his opening preparation could be remarkably shallow, and he had a weakness for dubious but provocative lines. Bezgodov correctly identifies this as a weakness, and in his book about Petrosian’s defensive skills, the reason that Petrosian is so often scrambling to dig up resources or simply survive is because he is so often put on his back foot early on in the game.”
IM John Watson, Chess Life Magazine

“The annotations are a very balanced combination of verbal and variation analysis. This book is very instructive and will make a welcome addition to the library of any player who is either looking to improve or who is a fan of Petrosian himself.”
Chris Wainscott, On the Road to Chess Master

“A work aimed squarely at the club player which attempts to tackle an often overlooked topic: improving your defence. Petrosian was a great defender and so Bezgodov is able to use the ninth world champion’s games to tackle not just direct defence, but how to hone that ability to snuff out danger in advance and so prophylactically disrupt your opponent’s attacking intentions.”
CHESS Magazine

“A great resource for chess players and trainers. The author explains and illustrates different aspects of defense in the context of the games of the 9th world chess champion. ‘Defend Like Petrosian’ will for sure increase your chess culture and help you play better defense.”
Davide Nastasio, Florida Chess