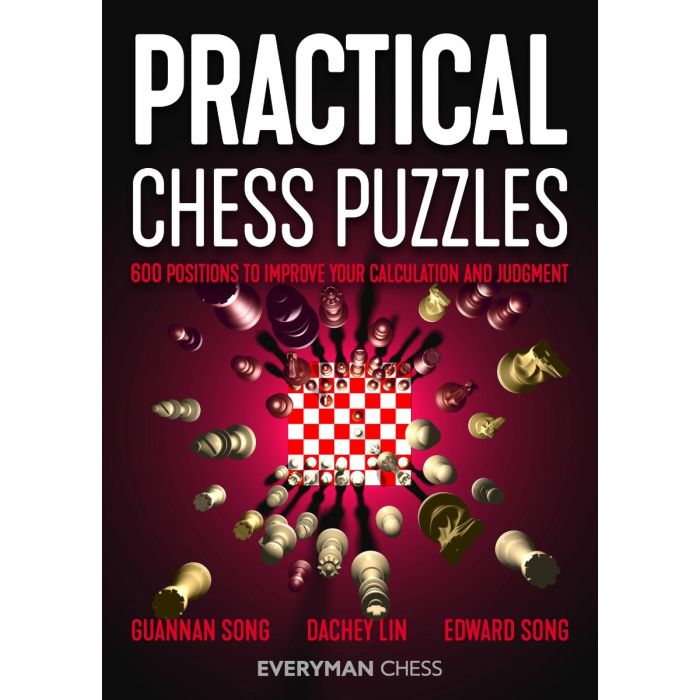 Chess puzzle books are undoubtedly popular – and with good reason. Solving chess puzzles helps to sharpen a player’s tactical and combinational skills. This ability is absolutely fundamental for chess development. You won’t get better at tennis until you can consistently hit the ball with accuracy and you won’t get better at chess until you improve your ability to calculate. It is that simple and there are no shortcuts.

Many puzzle books take a far too simplistic approach and offer endless positions where the solution is nearly always along the lines of: queen takes something check, king takes queen, check, check and a pretty mate. Aesthetically pleasing perhaps but of minimal use for actual improvement as the patterns are so familiar. Practical Chess Puzzles avoids this pitfall. The positions chosen are far more like those that actually appear on the board during the vast majority of games. Furthermore, at all stages, the puzzles are ranked, enabling the student to gauge progress and identify and correct weaknesses.

Dachey Lin is a FIDE Master from the United States, having attained the title in 2016. He is a seven-time All American Team member and participated in three World Youth Chess Championship events, tying for ninth place in 2009. Though he is not as active as the other authors, he enjoys following and helping other chess players and watching them develop and succeed.

Edward Song is an International Master from the United States. He won the 2014 US Cadet Championship, the 2017 Supernationals (tie) and the 2017 Denker Tournament of High School Champions (tie). He is also a four-time All American Team member and played two World Youth Chess Championships, achieving top ten both times. He is looking forward to making further progress towards the grandmaster title.