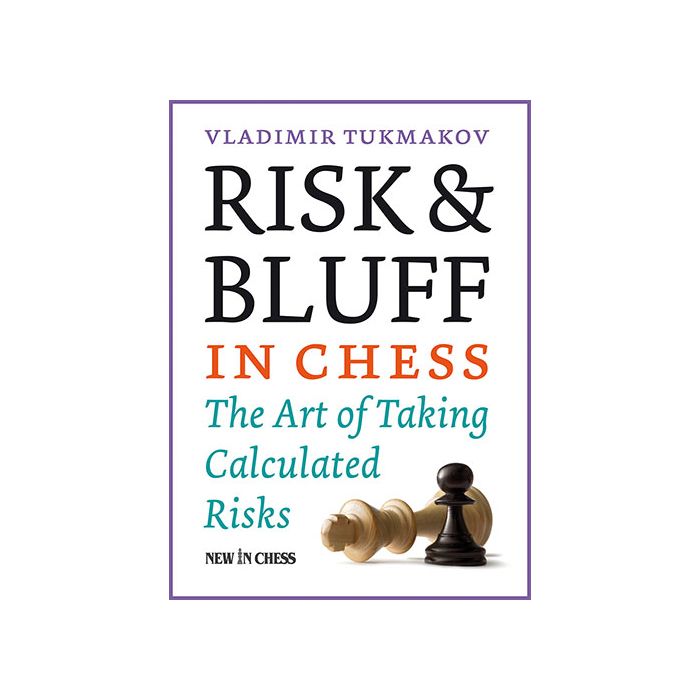 Shortlisted for the English Chess Federation Book of the Year Award 2016!

You cannot win in chess without taking risks. Winning requires courage and psychology. No matter how deep you calculate, there always comes a point where you have to deal with uncertainties and take a decision.

What is carefully calculated risk, and what is bluff? And why were famous players like Lasker and Tal so successful with both? They realized that chess is not a science. Emotions also play a role behind the board. If you can guess what your opponent is feeling and thinking, you are ahead of him.

When your main aim is to derail your opponent’s calculation by weaving a web of deception, you engage in the highest form of risk: bluff.

Renowned chess coach Vladimir Tukmakov has played against, and worked with, quite a few chess greats. Many of them told him frankly about their thoughts and feelings during crucial games.

These stories became the foundation of a collection of more than 100 practical ways that masters and grandmasters have used to push beyond the limits of calculation and take a deliberate risk. It works – even at the highest level! Tukmakov shows how to trick your opponent into believing your bluff.

After studying this book, with its many fascinating and often funny examples, you will think twice before wasting an opportunity to do what even the greatest players do: bluff your way to victory!

Grandmaster Vladimir Tukmakov (born 1946 in Odessa) had a rich career as a chess player. He finished second in three Soviet championships and won the Ukrainian championship. After his active career he became an esteemed chess coach. He was the non-playing captain of the Ukrainian team that won gold at the 36th Chess Olympiad and currently he coaching Dutch chess star Anish Giri.

IM Jeremy Silman, author of 'How to Reassess Your Chess':
"'Risk & Bluff' is fantastic! Vladimir Tukmakov has turned out to be an extraordinary chess writer. 'Profession Chessplayer' is top notch stuff and I really enjoyed his 'Modern Chess Preparation'. But 'Risk & Bluff' is perhaps the best of the three. I hope people appreciate it. Please make sure Mr. Tukmakov keeps writing!"

British Chess Magazine:
"Probably the most recommendable middlegame book of the year."

Johan Hut, Noord Hollands Dagblad:
"Tukmakov shows many examples where players don't win by playing the best move, but by chosing a risky move. Why are players doing so? Tukmakov endeavours to explain this case by case."

John Hartmann, Chess Life Magazine (US):
"A fascinating study of two misunderstood themes in chess (..) It might inspire readers to add a bit of spice to their play."

IM John Donaldson:
"Tukmakov's newest book deals with a topic seldom discussed in chess literature (..) [He] not only provides top-rate instructional material but also insights into the styles and preference of top-players (..) A book that should appeal to a wide range of players. Highly recommended."