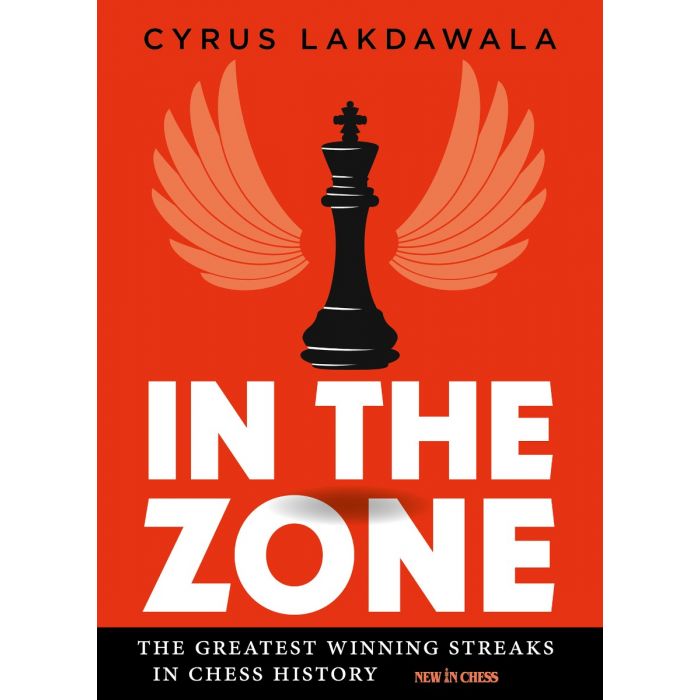 A winning streak in chess, says Cyrus Lakdawala, is a lot more than just the sum of its games. In this book he examines what it means when everything clicks, when champions become unstoppable and demolish opponents. What does it mean to be ‘in the zone’? What causes these sweeps, what sparks them and what keeps them going? And why did they come to an end?

Lakdawala takes you on a trip through chess history looking at peak performances of some of the greatest players who ever lived: Morphy, Steinitz, Pillsbury, Lasker, Capablanca, Alekhine, Botvinnik, Fischer, Tal, Kasparov, Karpov, Caruana and Carlsen. They all had very different playing styles, yet at a certain point in their rich careers they all entered the zone and simply wiped out the best players in the world.

In the Zone explains the games of the greatest players during their greatest triumphs. As you study and enjoy these immortal performances you will improve your ability to overpower your opponents. You will understand how great moves originate and you will be inspired to become more productive and creative. In the Zone may bring you closer to that special place yourself: the zone.

Cyrus Lakdawala is an International Master and a former American Open Champion. He has been teaching chess for four decades and is a prolific and widely read author. His Chess for Hawks won the Best Instructional Book Award of the Chess Journalists of America (CJA). Other much acclaimed books of his are How Ulf Beats Black, Clinch It! and Winning Ugly in Chess.

“Lakdawala is the author of quite a few acclaimed and prize-winning chess books, and this one is another direct hit. His annotations are never dull, which cannot be said of all other chess writers. It’s almost 400 pages full of chess delight.” -- Bab Wilders, Nederlands Dagblad

“In the Zone is the rare book that is both instructive and entertaining and should appeal to a wide audience, primarily players rated from 1800 to 2300.” -- International Master John Donaldson

“As ever, Lakdawala provides entertaining but also instructive coverage of a great many fine games in his latest work. He also explores just how such winning streaks, by the likes of Carlsen, Kasparov, Morphy and Pillsbury, arose and why they came to an end. If you fancy overpowering your next opponent or just improving your creativity, a study of some seriously impressive winning streaks in Lakdawala’s company might just come in handy.” -- CHESS Magazine

“The prolific American author has the clever idea of looking at thirteen players who have excelled at events starting with Morphy and ending with Magnus Carlsen at Grenke Classic 2019. This is a good excuse to look once again at Fischer’s stunning victory at the 1963/64 US Championship with 11/11 and every game is examined to find a link why Fischer dominated. There is an attempt in every chapter to explain why the player was at the peak of his powers and if there are numerous games then a few are selected to emphasise his prowess. A book that makes you think.” -- International Master Gary Lane, Chess Moves Magazine

“Lakdawala’s tone of voice is unique in chess literature; he is like a friend you have known for a long time. His qualities as a trainer and an author reinforce each other.” -- Thomas Binder, Glarean Magazine

“Lakdawala writes in a charming and highly instructive manner.” --Jeremy Silman, author of How to Reassess Your Chess

“This is an excellent and original idea for a book. We meet some of the greatest players from Morphy onwards and look at their peak performances. It might even inspire you to get ‘into the zone’ yourself in your next tournament, whenever that might be. As a highly experienced author and teacher, Lakdawala knows just how to get the balance right between words and variations, and has used a modern engine to check the analysis. You’ll find lots of Exercises (for you to solve), Principles (to help you improve) and Moments of Contemplation (to think about an interesting position).” -- Richard James, British Chess News

“Aside from discussing the streaks and the tournaments in which they occurred, Lakdawala annotates the games in his trademark humorous style. There is also a look behind the curtain to reveal what goes into achieving such amazing streaks: luck, craft, excellence as well as the ability to put it all together in one tournament. A welcome look at some phenomenal performances.” -- Carsten Hansen, American Chess Magazine