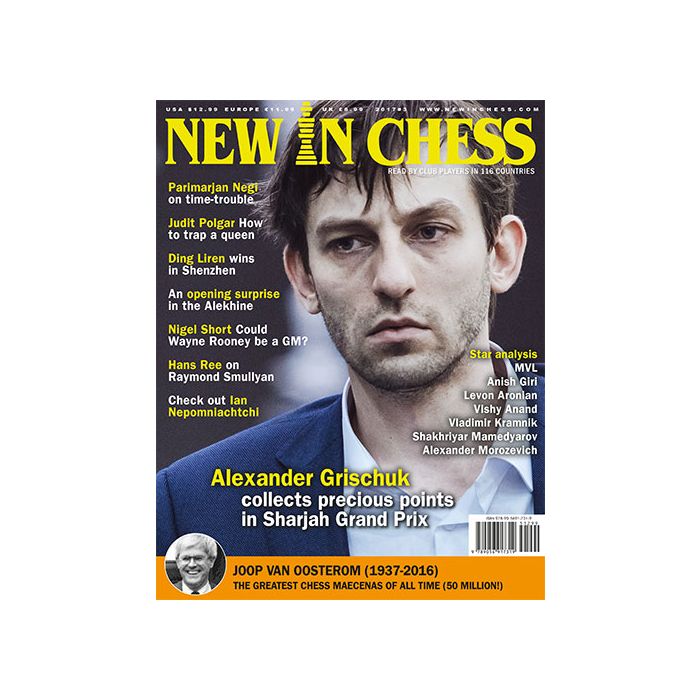 More than Black and White
A rather splendid chess set made in Augsburg in 1720 is currently on sale in Paris.

Your Move
Both Bogdan Lalic and Sergey Tiviakov claim long unbeaten streaks. Readers from Sweden and Germany share their thoughts on a chess table and on time-trouble.

Infographic
Which players had the lowest error-rate in a complete tournament? A surprising list.

The greatest Chess Maecenas of all time

Maxime Vachier-Lagrave reports from Sharjah
‘Gens circumspecta sumus’ seemed to be the motto of the Grand Prix in Sharjah, the first of a cycle of four tournaments that will decide on two coveted spots in the 2018 Candidates’ tournament. With game notes by Grischuk, Mamedyarov and MVL himself.

Nigel Short
Our columnist ponders an momentous question: could Wayne Rooney become a Grandmaster? The greatest British player of the 20th century on the importance of chance and pedigree in reaching the top.

Parimarjan’s Chess Gym
Parimarjan Negi on time-trouble. Learn when it’s your enemy, and when your friend.

Tan Zhongyi knocked out the top seeds to become Women’s World Champion in Tehran. A full report by Peng Zhaoquin.

Judit Polgar’s column
The Queen of Chess teaches how to trap a Queen.

S.O.S.
A second move-deviation in the Alekhine Defence! Jeroen Bosch points out the frivolous and fun move that will appeal to Alekhine players (and will baffle their opponents).