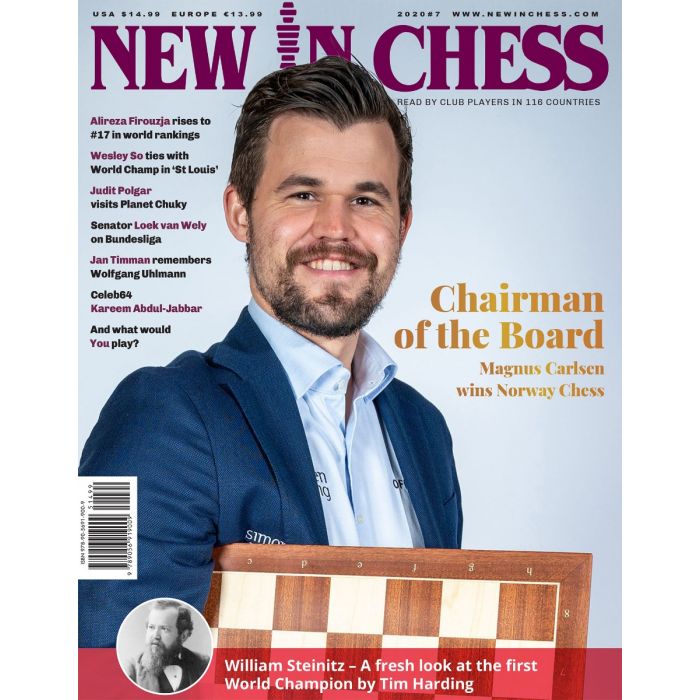 8 NIC’s Café
Magnus Carlsen visited the Oslo Stock Exchange to mark another milestone in his remarkable career. And there’s a huge difference between cheating (totally silly) and swindling (super cool)!

10 Your Move
More on The Origin of Good Moves, and another rook endgame that was not drawn at all.

12 A memorable Norway Chess
His unbeaten streak in classical chess ended after 125(!) games, but that could not stop Magnus Carlsen from claiming his third Norway Chess title. While the World Champion was critical of his play, he thoroughly enjoyed his return to ‘the wooden screen’.

40 William Steinitz
Tim Harding, author of the new book Steinitz in London, explains why this great player deserves a reassessment.

50 Carlsen and So share victory
In the face of the pandemic, the Saint Louis Chess Club moved the annual Rapid & Blitz online. Wesley So sensationally took the lead ahead of Magnus Carlsen, who suffered an annoying disconnect. In the Blitz, the World Champion fought back to share the spoils with the American.

67 What would you play?
Test your decision-making skills with Thomas ‘Toolbox’ Willemze.

72 Bundesliga at the board
The desire to play ‘real chess’ again was palpable, and dozens of foreign top players eagerly travelled to Karlsruhe for the Bundesliga Tournament.

85 Fair & Square
‘The least satisfying of desires.’ Who described chess this way?

86 Ivanchuk’s lessons
When he withdraws to ‘Planet Chuky’, his opponents know that the Force is against them. Judit Polgar tells us what she has learnt from the Ukrainian legend.

90 Sadler on Books
Our book reviewer wonders if chess books are getting bigger! The new games collections of David Navara and Tigran Petrosian are certainly hefty tomes, but he also read less heavy works.

95 They Are the Champions
Sabrina Vega Gutierrez is the national women’s champion of Spain.

104 Just Checking
Does Willy Hendriks believe that a knowledge of chess is useful in everyday life?