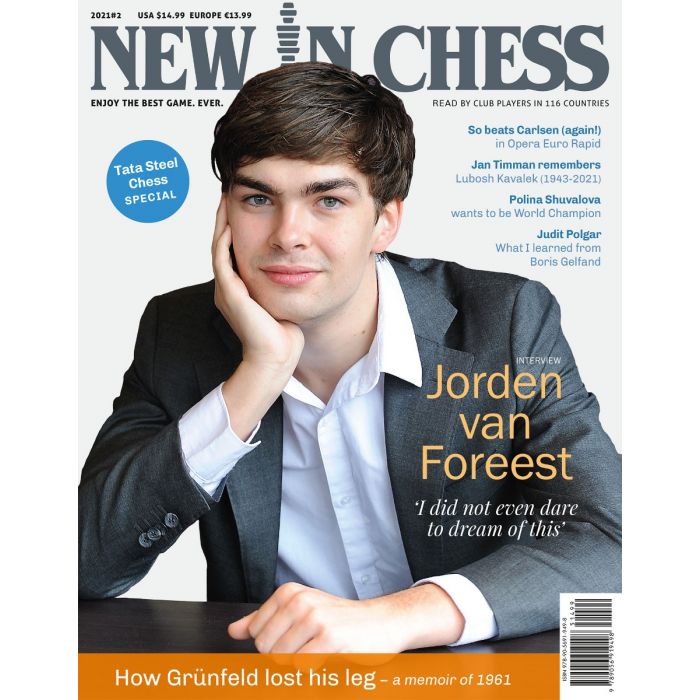 6 The living Ruy Lopez
What opening would you expect from a chess-playing living statue on Madrid’s Plaza Mayor?

8 NIC’s Café
The Queen’s Gambit was nominated for two Golden Globes and the Netflix hit series won… two! And still chess may get you banned on YouTube!

11 Your Move
An embarrassing mistake and a famous position.

22 Fair & Square
Novak Djokovic agrees that his main rival in the Australian Open, Daniil Medvedev, is ‘a master chess player’.

52 Interview: Jorden van Foreest
‘Reaching 2700, my big goal, was eclipsed by something much bigger’, says the winner of the Tata Steel Chess Tournament. He also reveals the secret of his success.

59 How Grünfeld lost his leg
Gerben van Manen takes you back to 1961 in Beverwijk, the town he grew up in and the place where the chess players met before they moved to nearby Wijk aan Zee seven years later.

62 The Carlsen-So rivalry
The final of the Opera Euro Rapid offered the World Champion a perfect opportunity to regain his dented self-confidence and have his revenge on Wesley So. But the American showed his extraordinary class in online chess and won again.

76 Polina Shuvalova
We all know the top junior in the world rankings, Alireza Firouzja, but who is the top-rated female junior?

84 Judit Polgar
The Queen of Chess looks at the qualities of Boris Gelfand, an old rival and a dear friend.

88 Sadler on Books
Matthew Sadler happily admits that in these days of lockdown he is most enjoying books ‘that transport you away from the current world into a bygone era’.

93 What would you play?
Test your decision-making skills with Thomas ‘Toolbox’ Willemze.

98 Lubosh Kavalek (1943-2021)
Jan Timman remembers a good-natured grandmaster with a killer instinct and a dyed-in-the-wool negotiator.

105 They are The Champions
Nicolas Croad is the national champion of New Zealand.

106 Just Checking
Which three people would Fiona Steil-Antoni like to invite for dinner?