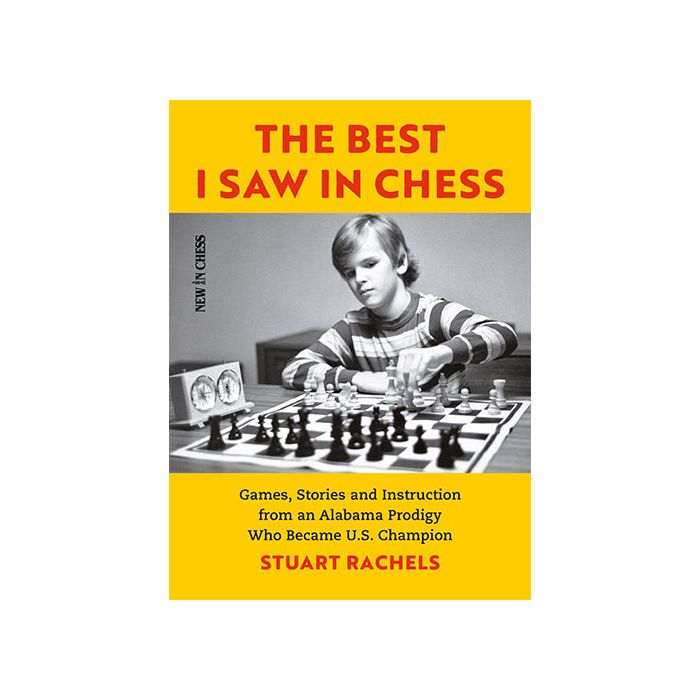 About / The Best I Saw in Chess

At the U.S. Championship in 1989, Stuart Rachels seemed bound for the cellar. Ranked last and holding no IM norms, the 20-year-old amateur from Alabama was expected to get waxed by the American top GMs of the day that included Seirawan, Gulko, Dzindzichashvili, deFirmian, Benjamin and Browne.

Instead, Rachels pulled off a gigantic upset and became the youngest U.S. Champion since Bobby Fischer. Three years later he retired from competitive chess, but he never stopped following the game.

In this wide-ranging, elegantly written, and highly personal memoir, Stuart Rachels passes on his knowledge of chess. Included are his duels against legends such as Kasparov, Anand, Spassky, Ivanchuk, Gelfand and Miles, but the heart of the book is the explanation of chess ideas interwoven with his captivating stories.

There are chapters on tactics, endings, blunders, middlegames, cheating incidents, and even on how to combat that rotten opening, the Réti. Rachels offers a complete and entertaining course in chess strategy. At the back are listed 110 principles of play—bits of wisdom that arise naturally in the book’s 24 chapters.

Every chess player will find it difficult to puthis sparkling book down. As a bonus, it will make you a better player.

Stuart Rachels (b. 1969) is an International Master who retired from chess when he was 23. He works as an Associate Professor in the Philosophy Department at the University of Alabama and has edited new editions of books by his father, the famous philosopher James Rachels.

“This book was a blast to read. It is fresh, entertaining, and has funny stories and anecdotes about Kasparov, Kortchnoi, Anand, Seirawan and many others. But it also offers a lot of serious, deep chess analysis, and it is a pleasure to look at plenty of interesting games.”
Arne Kaehler, ChessBase News

"The most enjoyable book I've read in a decade. This is what an autobiographical chess book should be: entertaining, honest and instructive."
GM Andrew Soltis, author of ‘Confessions of a Chess Grandmaster’

“A gripping read throughout, Rachels concludes by presenting 110 principles of play, guidelines which should help all strengths of reader.”
CHESS Magazine

“Everyone who loves chess should thank Stuart Rachels for giving us this beautifully written book. The analysis is deeply throughout, with just the right mix of variations and English-language explanations, and the stories are delightful.”
GM Patrick Wolff, two-time US Champion

“This is a really absorbing read because Rachels played games against the elite but with hindsight can be reflective and honest about the people he met. I particularly like his revealing anecdotes which are rather brutal.”
IM Gary Lane, Chess Moves Magazine

“Highly enjoyable. An original book that combines a game collection, a memoir and an instructional guide.”
IM Jeroen Bosch, Schaakmagazine

“The constant switching between topics will ensure you never get bored. It’s often very funny too: a hugely entertaining and engrossing read which I thoroughly enjoyed. If you like games collections and biographies you shouldn’t hesitate to snap this one up.”
Richard James, British Chess News

“Well written and entertaining. Definitely a book to which I will keep returning, both to dive into the games and the quality annotations as well as to enjoy the many stories.”
Carsten Hansen, American Chess Magazine