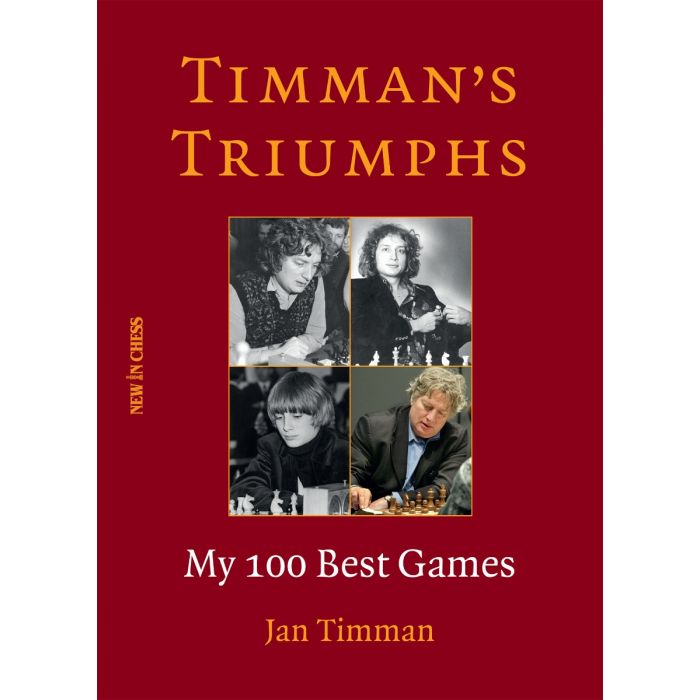 “This is magnificent. The book is dotted with fascinating anecdotes. Jan Timman’s games reflect his adventurous outlook on life. He plays in a swashbuckling style, but always underpinned with a great strategic and positional sense. In this book you will find great positional wins and fantastic attacking chess. Timman is absolutely fearless, always prepared to sacrifice material for the initiative and for the attack. But he also enjoys the beauty in chess. The games are mainly described in words, with variations given only when things get critical.”
GM Daniel King, Power Play Chess

“Jan Timman takes the readers on a fascinating journey through more than 50 years from the good old days to modern computer times. But his play is the same: always fighting and creative. A worthy successor to Timman’s Titans.”
GM Karsten Muller, author of ‘Bobby Fischer: The Career and Complete Games’

“All the games are being deeply analysed and Jan Timman is very good at that, as he already showed in his previous books. The richness of variations, the complexity of choices, the balance between calculation and intuition, it’s all there. The book refers marginally to the background and the setting of the fights, the main focus is on the games themselves. Again a beautiful book by Jan.”
IM Hans Bohm, De Telegraaf

“A new and splendid book by Jan Timman. Once again he shows his ability to reveal in deep analysis the hidden truth in the games. Of course, in between the games there is ample room for fascinating history and anecdotes.”
Bab Wilders, Nederlands Dagblad

“Just out and a candidate for chess book of the year. There is an abundance of new material, for example eighteen games form the 21st century. Every game is put in its context, often with a funny anecdote.”
GM Dimitri Reinderman, Noord-Hollands Dagblad

“Recounts the career of the best player in the West for much of the 1970s and 80s.  This volume includes 100 of Jan Timman’s greatest games with instructive commentary accompanied by many interesting stories. This is a book that belongs in the library of every chess player.”
IM John Donaldson

“Timman has always been a universal player who uses a wide range of openings so there’s a lot of variety in the play: no chance of getting bored by seeing the same type of position over and over again. Each game is put into its context regarding the tournament or match in which it took place. The text is also enlivened by many entertaining anecdotes, often concerning Timman’s rather hedonistic (especially in his early years) lifestyle. We read, for instance, about listening to Frank Zappa with Ray Keene, and taking the young Nigel Short to a nightclub on the eve of an important game. There are many readers who particularly enjoy best games collections: they will certainly revel in this excellent book. You get 100 great games from one of the best players of the past 50 years, with lucid and instructive annotations. I’m pleased to give this book a warm recommendation.”
Richard James, British Chess News

“Lots of splendid games. The annotations are pleasantly easygoing with short variations in which Timman balances the computer evaluation with profound comments on the practical and human aspects of the essence of the position. The large number of games with black is striking: Timman always played for a win, with both colours.”
IM Jeroen Bosch, Schaakmagazine

“Given Timman’s longevity, we have every right to expect a top-class collection of games from the highest levels of chess – and that is exactly what we find in this entertaining and instructive book. Timman’s annotations are up to his usual high standard. There is plenty of prose, including anecdotes of his friends and colleagues, and not many longer lines of analysis. This book is definitely a triumph for Jan Timman.”
Sean Marsh, CHESS Magazine

“Timman is one of the most diligent and most accomplished authors of his gild. Self-criticism comes natural to him. Timman presents his games chronologically and takes the reader on a journey through his career of more than 50 years. Particularly fascinating are those passages in which he characterizes his competitors. His style of analysis is very pleasant. If you buy a Timman book it very unlikely you will be disappointed.”
Harry Schaack, KARL Magazine

“Besides a collection of 100 beautifully annotated games, this book is also an ode to freedom, the freedom of the days when he became a professional chess player.”
GM Hans Ree, NRC Handelsblad

“Here they are: the best hundred games of ‘Best of the West’ Jan Timman. And they surpass all expectations. How pure and logic was the style managed to express in his best games, and how do some of his games resemble a flawless strategic accomplishment. I was aware that that Timman’s endgames were of exceptional quality, but he is also able to ruthlessly knock out famous players if they make a small, almost undetectable error. Timman’s chess is elegant, extremely well-considered and beautiful, and this collections is full of gems. This book is (can I say this?) a triumph.”
Florian Jacobs, Max Euwe Center