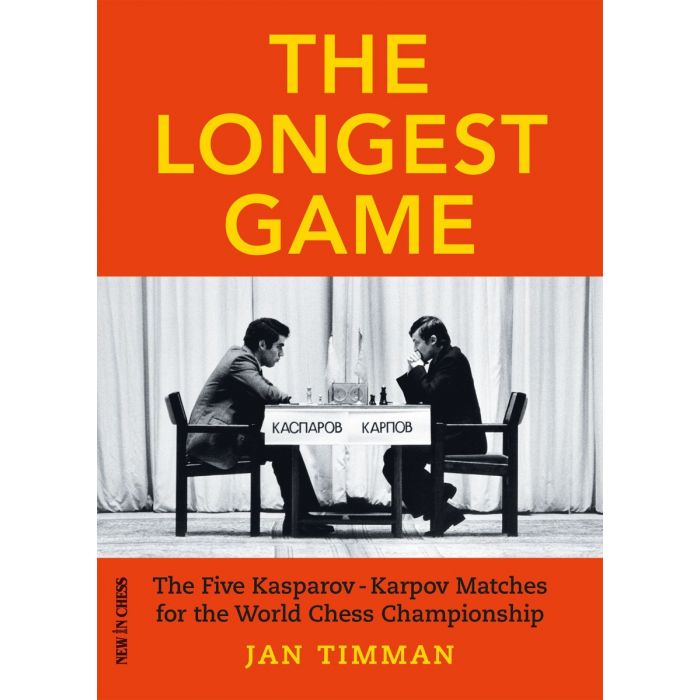 On September 10, 1984, Anatoly Karpov and Garry Kasparov appeared on the stage of the Hall of Columns in Moscow for the first game of their match for the World Chess Championship. The clash between the reigning champion and his brazen young challenger was highly anticipated, but no one could have foreseen what was in store. In the next six years they would play five matches for the highest title and create one of the fiercest rivalries in sports history. The matches lasted a staggering total of 14 months, and the ‘two K’s’ played 5540 moves in 144 games.

His win was not only hailed as a triumph of imaginative attacking chess, but also as a political victory. The representative of ‘perestroika’ had beaten the old champion, a symbol of Soviet stagnation. Kasparov defended his title in three more matches, all of them full of drama. Karpov remained a formidable opponent and the overall score was only 73-71 in Kasparov’s favour.

In The Longest Game Jan Timman returns to the Kasparov-Karpov matches. He chronicles the many twists and turns of this fascinating saga, including his behind-the scenes impressions, and takes a fresh look at the games.

Jan Timman is a former World Championship Candidate who rose to the number two spot of the FIDE world rankings. He is the author of highly acclaimed books such as Curacao 1962 and The Art of the Endgame. His best-selling Timman’s Titans won the 2017 English Chess Federation Book of the Year Award.

Johan Hut, Noord Hollands Dagblad:
"The ultimate book on Karpov – Kasparov. Jan Timman has again written a monumental history book on a subject that will continue to capture our imagination."

International Master Jeroen Bosch, Schaakmagazine:
"Timman, as a top grandmaster, rival and contemporary, is in an excellent position to make sense of the sometimes chaotic political rumpus, but as an ‘outsider’ he is able to be sufficiently objective. Again a splendid book from Jan Timman."

Grandmaster Matthew Sadler, former British Champion:
"There is something extremely satisfying about reading about events that you know well, and then discovering that you’ve forgotten or never noticed some important details! … I really like Timman’s annotations. Clear and concise, pointing out all the key moments in the game as well as some excellent positional instruction."

Sean Marsh, CHESS Magazine (UK):
"One of the must-buys of 2019, for sure. It can be enjoyed on several levels: the games are brought back to life due Timman’s new analysis and highly pertinent observations; the personal stories will be new to most readers; the background to each match is never less than fascinating, instructive and entertaining."

Carsten Hansen, American Chess Magazine:
"The book also discusses the behind-the-scenes drama of which casual observers will probably be unaware. A compelling read: you know the outcome, yet you are still glued to your seat, turning the pages, going through the games, almost as if you are watching the players in real time."