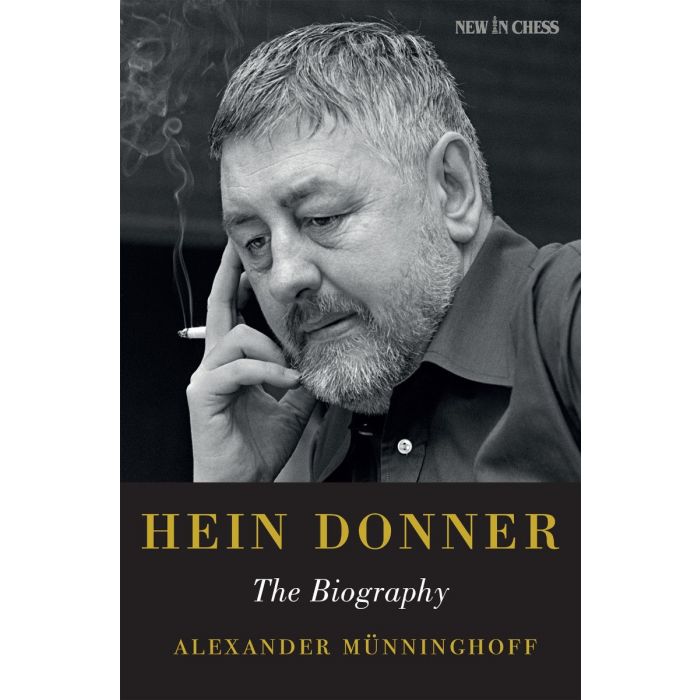 For more information about how to read the Interactive eBook, click on this link

Hein Donner (1927-1988) was a Dutch Grandmaster and one of the greatest writers on chess of all time. He was born into a prominent Calvinistic family of lawyers in The Hague. His father, who had been the Minister of Justice and later became President of the Dutch Supreme Court, detected a keen legal talent in his son. But Hein opted for a bohemian lifestyle as a chess professional and journalist. He scored several excellent tournament victories but never quite fulfilled the promise of his chess talent.

Hein Donner developed from a chess player-writer into a writer-chess player. His provocative writings and his colourful persona made him a national celebrity during the roaring sixties. His book ‘The King’, a fascinating and often hilarious anthology spanning 30 years of chess writing, is a world-wide bestseller and features on many people’s list of favourite chess books.

The author Harry Mulisch, his best friend, immortalized Hein Donner in his magnum opus The Discovery of Heaven. In 2001 the book was adapted for film, with Stephen Fry playing the part that was based on Donner. Included in Hein Donner is the interview in which Harry Mulisch tells about his friendship with Donner.

After suffering a stroke at the age of 56, Donner lived his final years in a nursing home. He continued writing however, typing with one finger, and won one of the Netherlands’ most prestigious literary awards. Alexander Münninghoff has written a captivating biography of a controversial man and the turbulent time and age he lived in.

Alexander Münninghoff is an award-winning author from the Netherlands. He wrote the acclaimed biography of the man that was dethroned by Hein Donner as Dutch champion: former World Chess Champion Max Euwe. His memoir ‘The Son and Heir’ with the complex story of the Münninghoff family in the 20th century, is an international bestseller.

“Well-done by Münninghoff, instead of hopping from anecdote to anecdote, his first concern is always the flow of the narrative. There is a lot in the book that I didn’t know.” -- Hans Ree, author of The Human Comedy of Chess

“A fascinating insight into one of the most colourful characters in the chess world of that time and also an ideal complement to Donner's own writings in The King.” -- Steve Giddins, co-author of Side-Stepping Mainline Theory

“A book to bury yourself in. Donner’s life was as chaotic and surprising as his games.” -- IM Jeroen Bosch, Schaakmagazine

“Alexander Münninghoff has excellently portrayed the non-conformist chess grandmaster and author, without smoothing over anything.” -- Ralf Binnewirtz, Glarean Magazine

“He was a remarkable man and Münninghoff’s biography really brings the story to life. It is unclear whether or not one would have liked Donner as a friend, but getting to know him at this safe distance has been a fabulously entertaining journey.” -- Sean Marsh, CHESS Magazine

“Crammed full of entertaining anecdotes. Anyone who was following international chess between the 1950s and the 1970s will undoubtedly want to read this book. A thoroughly enjoyable, if informal, biography of a fascinating and unusual personality.” -- Richard James, British Chess News

“This biography is ‘warts and all’, and certainly doesn’t aim to paint Donner in a particularly favourable light. It does, however, beauti­fully convey the life of an extremely intelligent, chaotic, indolent, larger-than-life figure, who left an indelible impression on many of the people he encountered. I read it from cover to cover in a few hours and finished it with a sense of amazement that someone so unfamiliar to me had been brought to life so completely.” -- GM Matthew Sadler