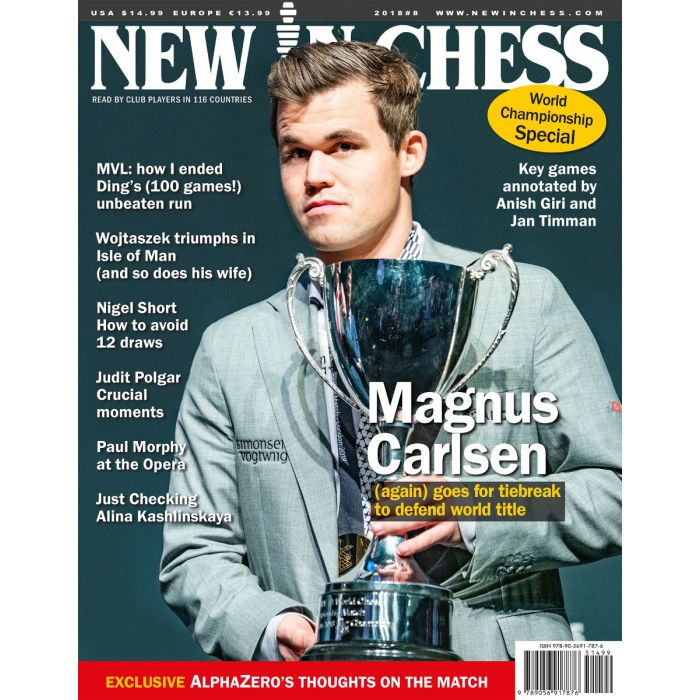 Just like two years ago in New York, Magnus Carlsen steered for a tiebreak in the World Championship match against Fabiano Caruana in London. A choice that was widely criticized, but again proved highly effective.

And what would the strongest program around think about the match that was held at a stone’s throw from DeepMind’s headquarters in London? Matthew Sadler reports.

Nigel Short wonders what changes are needed to keep the World Championship attractive for a broad audience.

Arkady Dvorkovich is only the seventh FIDE president.

So happy together in Isle of Man

Radek Wojtaszek was the sensation of the 2018 edition of the Chess.com Open in Isle of Man, taking home £ 38,000. His wife, Alina Kashlinskaya, added another £ 7,000 to their celebration day by winning the top women’s prize.

At the Shenzhen Masters, Maxime Vachier-Lagrave ended Ding Liren’s unbeaten streak of 100 games and took the title on tiebreak.

Paul Morphy’s rise from child prodigy to the ‘pride and sorrow of chess’ forms the backdrop to a new movie.

A chess-themed pub in downtown Oslo, Maurice Ashley on ‘The Daily Show’  and a revisited flyover in Kolkata.

Not everyone rejoiced when a rapid tiebreak decided the world title.

Why not gain some space while advancing a pawn for a fianchetto?

Crucial moments can dramatically change the course of a game. Or can even have far-reaching consequences for a player’s career.

After many years of absence, Hans Ree ventured to enter a serious tournament again.

Reaching a winning position is one thing, bringing home the bacon another, especially in blitz. Maxim Dlugy looks at the art of ‘closing’ ‘totally won’ games.

Before he delves into middlegames and openings, Matthew Sadler shares his enthusiasm for the first part of a 3-volume biography of second World Champion Emanuel Lasker.

What is Alina Kashlinskaya’s favourite square?

Theresa May hopes for the endgame.