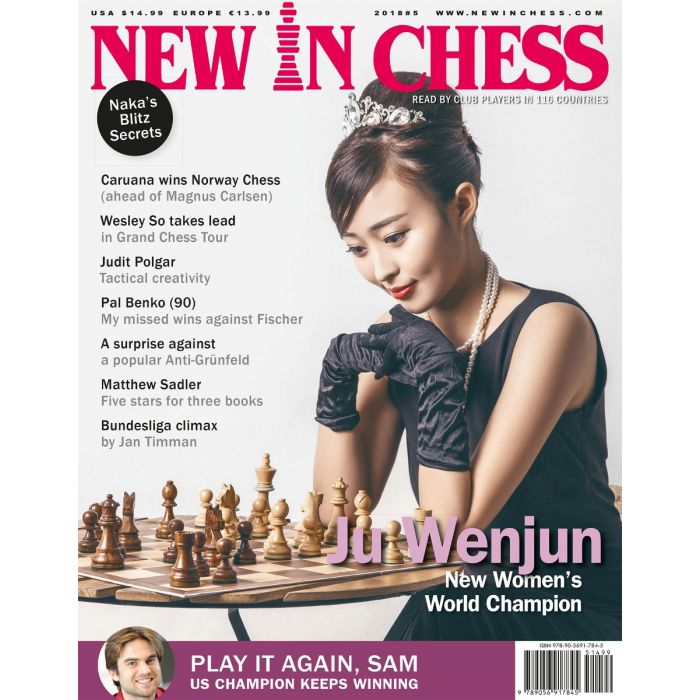 A profile of Ju Wenjun and exclusive game notes by the new champ.

Magnus Carlsen had an explosive start at Altibox Norway Chess. But then the World Champion stalled and it was his upcoming Challenger who crowned a mighty comeback.

Hot on the heels of his win at the US Championship, Sam Shankland claimed the Capablanca Memorial and the American Continental Championship.

The first two legs of the 2018 Grand Chess Tour saw Wesley So in great shape. Both in Leuven and in Paris the American topped the rapid competition and he is leading the overall standings.

Maxim Dlugy explains why Hikaru Nakamura is such an exceptional Blitz player.

Tactical tricks and puzzles are inspiring, as Judit Polgar will show you.

Playing against ‘a god’

On the occasion of his 90th birthday, Pal Benko shows the chances he missed in his games against Bobby Fischer.

Nigel Short gives an update on his attempt to become FIDE President.

You offer a knight and continue to do so when your opponent spurns it. Who will blink first?

Sam Shankland wrote a masterful book on pawns and our reviewer loved it.

Jan Timman looks at the exciting finish of the Bundesliga.

What is Bassem Amin’s life motto?

The Road to Kathmandu

As Nepal continues to recover from the 2015 earthquake, chess can make a contribution.

Alexander Grischuk informs us what was really in the bottle he showed at a press conference during the Candidates.

A graphic on the history of the Women’s World Championship.

Charles Krauthammer knew the dangers of the game he loved dearly.