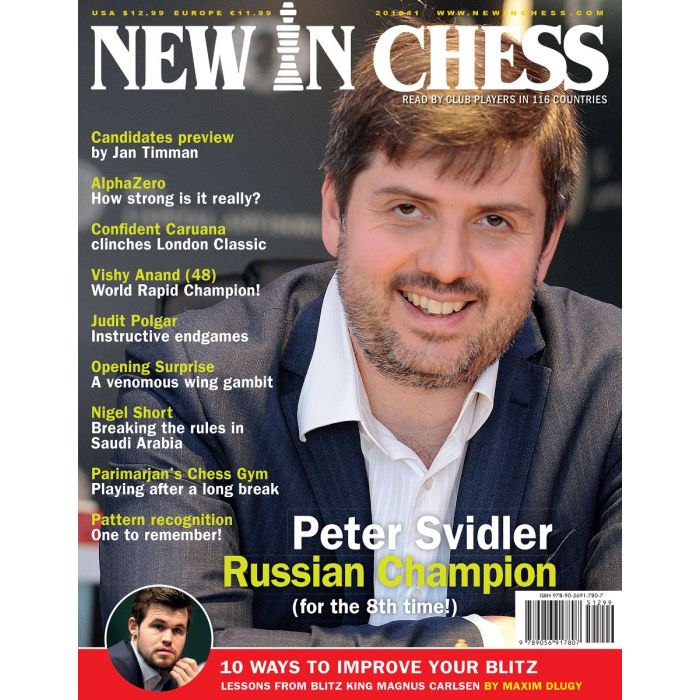 NIC's Café
A chess club in Moscow with an upscale bar. And Hou Yifan goes to Oxford.

Your Move
Ding Liren’s Game of the Year inspired a tribute to Hein Donner.

Tiger of Madras bites back
The amazing Vishy Anand (48) won the rapid world title in Riyadh.

Saudi Arabian Knights
If next year players from all countries are welcome, the World Rapid & Blitz in Riyadh might be a truly great event, Nigel Short argues. If they can find some decent arbiters, that is.

The King of Blitz
Halfway through the King Salman Blitz World Championship, he was trailing Sergey Karjakin by 2(!) full points, but on the second day Magnus Carlsen was merciless, majestic and often machine-like. Maxim Dlugy presents a crash course in blitz and illustrates his pieces of advice by a crystal clear dissection of the games that secured the Norwegian’s triumph.

Back at the board
Who hasn’t felt the uneasiness of playing after a prolonged break? Parimarjan Negi has some good advice.

Secrets of Opening Surprises
A venomous wing gambit in the Symmetrical English Opening.

Youngsters wake up giant
In his home city of St. Petersburg, Peter Svidler won the Russian Championship for the 8th time.

Chess Pattern Recognition
The inverted 'en passant' is an option well worth keeping in mind.

Sadler On Books
Matthew Sadler reviews books and DVDs that may help you get into good shape before your next tournament.

Place your bets for Berlin
Which Candidate will gain the right to challenge World Champion Magnus Carlsen? Jan Timman looks at their chances and names his favourite.

Just Checking
Does David Howell have any superstitions concerning chess?