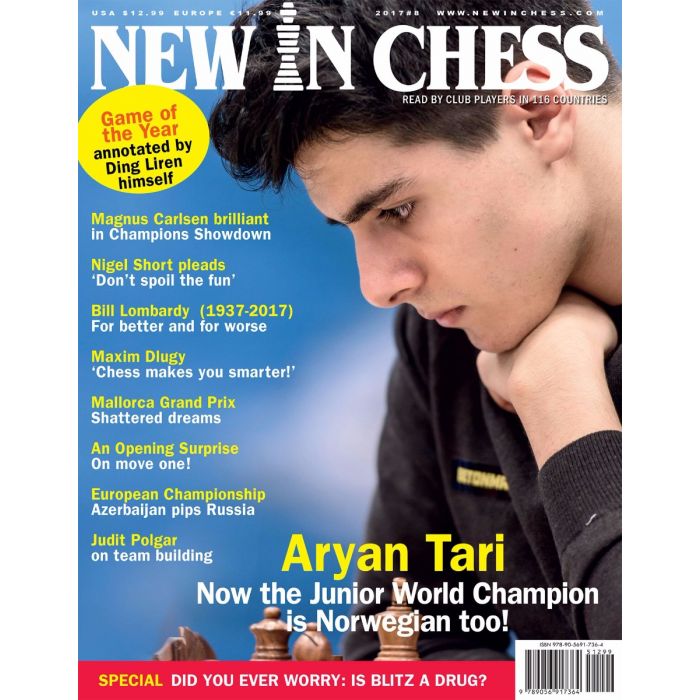 Is blitz a drug?
Jennifer Vallens explains how getting your fix may fix your game.

The Game of the Year
Ding Liren created a masterpiece of lasting beauty, annotated by the Chinese GM himself.

Mind Games in Mallorca
While Radjabov and Vachier-Lagrave saw their hopes to earn a place in the Candidates tournament go up in smoke, two GMs not present in Mallorca could celebrate their qualification at home.

Peak ratings
Who will be missed most at the Candidates in Berlin?

Judit Polgar’s column
Coaching a team is not merely a matter of fielding the strongest players.

Don’t spoil the fun
Nigel Short argues that it’s lack of chess culture if you deny your opponent the chance to show the point of his fine
play.

Bill Lombardy: 1937-2017
Mark Wieder remembers an old friend, increasingly embittered and hard to deal with, but with a never-ending love
for the game.

Fair & Square
What was part of Jane Fonda’s happiness in her marriage with Roger Vadim?

Azerbaijan European Champions
Unruffled by a sensational first-round loss, Azerbaijan went on to win the European Team Championship ahead of
Russia in a classic comeback story.

For fun & for blood
Entertainment and experiment are the key words as top stars engage in unusual competitions at the Champions
Showdown in St. Louis. The World Champion was in a league of his own.

Sadler on Books
Matthew Sadler was happy to receive more than one book with series of instructive positions.

The journey of a lifetime
Hans Ree read a book about chess life in the period of Dutch colonial rule in Indonesia.

Just Checking
What was the best thing Maxim Dlugy ever said about chess?