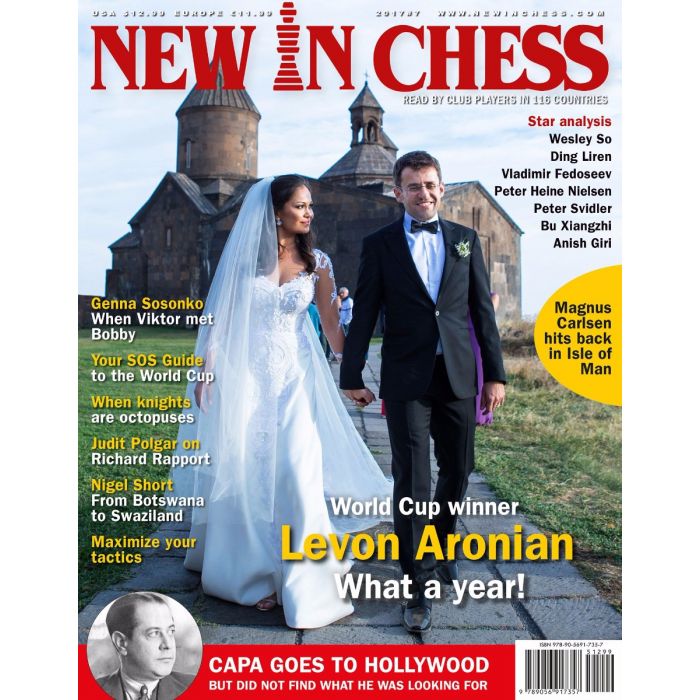 Aronian wins World Cup
In Georgia’s capital Tbilisi, physical fitness, mental resilience and a close-knit team were the pillars of Levon Aronian’s fully deserved success. Not for the first time this year the Armenian out-performed World Champion Magnus Carlsen. His fans have reason to believe that he is closer to his biggest dream than ever.

Underperforming
At the World Cup a substantial number of elite players performed (well) below their rating. What does that mean?

Capa goes to Hollywood
In the glamorous world of film stars and moguls, the chess champ was chasing his own dream. In vain. Bruce
Monson takes us back to a memorable visit that may not have brought Capablanca what he was hoping for but
produced a wealth of stories.

Magnus says ‘relax’
The World Champion entered the rapidly growing Open on the Isle of Man, hungry for chess after his brief sojourn in Tbilisi. With a relaxed approach, both freewheeling and energetic, he was the fully deserved winner of the £50,000 first prize.

Fair & Square
Why did Jimmy Carter, the 39th President of the United States, give up chess?

Secrets of Opening Surprises
The World Cup in Tbilisi was the perfect place to have a number of SOS ideas up your sleeve.

When Viktor met Bobby
For the last time. A hitherto unknown letter explains why Kortchnoi lost his wish to see Fischer.

Chess Pattern Recognition
You remember Kasparov’s mighty octopus on d3. There are more.

Diamonds Are Forever
Nigel Short teaches you a thing or two about Botswana and Lesotho.

Judit Polgar’s column
Richard Rapport’s returning dilemma: 1.b3 or not b3?

Sadler on Books
Matthew Sadler allots five stars to two biographical works about brilliant and tragic heroes of our game.

Just Checking
Who is ‘Miro’s’ favourite chess player of all time?