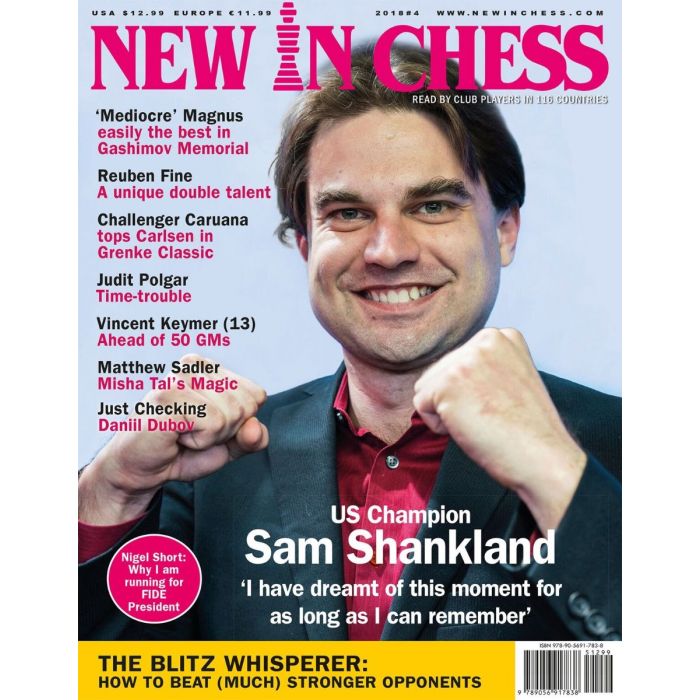 Caruana, So or Nakamura, who would be the new US Champion? Well, none of them, as Sam Shankland claimed the title, pocketed $ 50,000 and finally crossed the 2700 ELO mark.

‘Mediocre’ play proved good enough for Magnus Carlsen to win the Vugar Gashimov Memorial for the third time (with a 2884 performance).

Only four days after the Candidates in Berlin, Fabiano Caruana sat down to play ... Magnus Carlsen! The American won the Grenke Classic. Vincent Keymer (13) sensationally claimed the Grenke Open.

Columnist Nigel Short explains why he is running for FIDE President.

Time-trouble is no good, Judit Polgar warns, but can produce fascinating chess.

He was one of the strongest chess players in the world when he abandoned chess to embark on a brilliant career in psychology.

A dazzling and enchanting chess set with a price tag of 580,000 euros.

More correspondence chess (and Nigel Short) and who was that elderly gentleman in London in the 1970s?

A graphic on the history of one of the great national championships.

Another exchange sac worth knowing.

More blitz tips from Maxim Dlugy. Most of the time it’s not about pawns.

Into the lion’s den

Hans Ree on a book about Vladimir Kramnik by his former manager Carsten Hensel.

Who doesn’t know that Mikhail Tal was famous for his daring sacrifices? But Matthew Sadler points out that the endgames that arose as a result could be just as fascinating.

No Moro Magic in Malmö

But Jan Timman saw that the youngsters did not hide their ambitions at the TePe Sigeman tournament.

Where is Daniil Dubov’s favourite place in the world?

CONTRIBUTORS TO THIS ISSUE