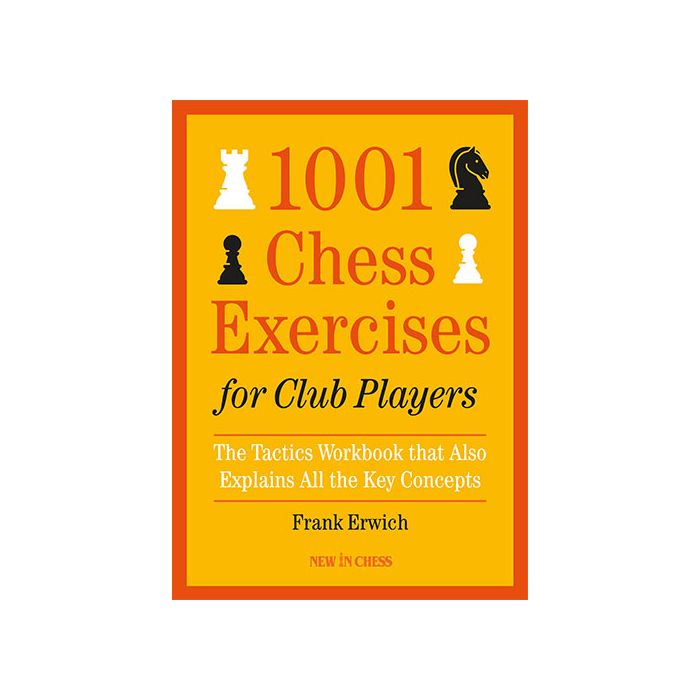 A complete course for club and tournament players

Chess is 99% tactics. This celebrated observation is not only true for beginners, but also for club players (Elo 1500 – 2000). If you want to win more games, nothing works better than training your combination skills.

There are two types of books on tactics: those that introduce the concepts followed by some examples, and workbooks that contain lots of exercises. FIDE Master Frank Erwich has done both: he explains all the key tactical ideas AND provides an enormous amount of exercises for each different theme.

Erwich has created a complete tactics book for ambitious club and tournament players. He takes you to the next level of identifying weak spots in the position of your opponent, recognizing patterns of combinations, visualizing tricks and calculating effectively. Erwich has also included a new and important element: tests that will improve your defensive skills.

1001 Chess Exercises for Club Players is not a freewheeling collection of puzzles. It serves as a course text book, because only the most didactically productive exercises are featured. Every chapter starts with easy examples, but don’t worry: the level of difficulty will steadily increase.

Frank Erwich is a FIDE Master and an experienced chess trainer from the Netherlands.

“Good work! Lots of exercises, not many words, just what I like. The chapter on defence, in particular, is very clever. One is so accustomed to attacking combinations, but tactics can be used in defence as well.” -- Grandmaster Simen Agdestein, VG Daily News

“I was very impressed by the range of positions that Erwich selected. A good book of its kind! Four stars!” -- Grandmaster Matthew Sadler, award-winning author of Chess for Life

“The material at the beginning of each chapter is clearly explained; the exercises which follow will certainly improve readers’ vision, calculation and tactical memory banks.” -- CHESS Magazine

“Erwich’s book will help players of 1500-2000 Elo to discover and prepare tactical tricks. These will often decide the game immediately, but sometimes they will lead to an advantage that will need to be converted in the endgame.” -- B.H.Wilders, Nederlands Dagblad

“A well-thought out tactics book aimed at players rated from 1500-2000. One of the better exercise books to come out in recent years.” -- International  Master John Donaldson