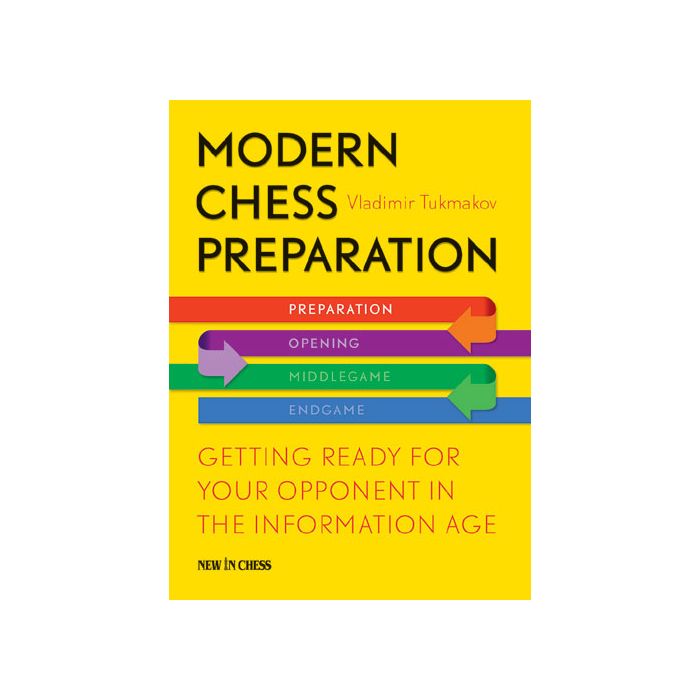 Winning starts with planning before the game, teaches legendary chess coach Vladimir Tukmakov. In this ground-breaking book he shows how chess preparation has become a systematic process and how today’s top players make their game plans.

The most important aim of modern preparation, both for professionals and for ambitious amateurs, is to get a playable position that you understand better than your opponent.

The role of the computer in preparation has grown tremendously and Tukmakov explains how top grandmasters use their ‘Metal Friend’. He warns that professionals should not put too much trust in chess engines and should analyse more deeply themselves.

Club players, on the other hand, should reduce their time in front of the machine to a minimum. Tukmakov explains what amateurs should do in order to arrive at the board well-armed: study the classics, analyse your own games without a computer, and know yourself.

A special chapter is devoted to must-win situations: when the outcome of a tournament, a match or even a whole life depends on a single game. With lots of brilliant examples, inside information and amusing anecdotes, Modern Chess Preparation is not only highly instructive, but also a joy to read.

“Understanding the strengths and weaknesses of your opponent, and having a sober awareness of your own shortcomings, will pay dividends at any level, from beginners up to World Champions.”

A former Ukrainian champion, Grandmaster Vladimir Tukmakov (born 1946 in Odessa) won many tournaments and came second in three Soviet championships. After his active career he became an esteemed chess coach. He was non-playing captain of the Ukraine team that won gold at the 36th Chess Olympiad in Calvia, 2004.

Martin Rieger, Rochade Europa Magazine:
"Tukmakov has created a unique symbiosis: a training book with stories. Qualifications such as 'brilliant' or 'wonderful' are really far too stale for this work (..) This book will most probably become a classic in chess literature."

IM Jeremy Silman, author of 'How to Reassess Your Chess':
"A fascinating and original (useful!) book about chess prep, but not the kind you've ever been exposed to before (..) Exhilarating reading (..) This chapter [2: 'The Computer Era'] is nothing less than brilliant (..) Overall this book is beautifully written and deeply thought out."

Carsten Hansen, ChessCafe:
"The last chapter, 'Deciding Games', makes for fascinating reading. It is clearly a subject that has not been covered in great detail in any book that I can think of. It discusses how to approach those key games that can be last-round deciders, but even crucial games earlier in the tournament against key opponents."

GM Luke McShane:
"I really like this book (..) Tukmakov's discussion of the modern game is highly astute."

Babs Wiilders, Nederlands Dagblad:
"Covers all stages of the game, with both strategic and tactical perspectives (..) Splendid instructional material for every chess player who wants to get ahead."

IM Arthur van de Oudeweetering, ChessVibes:
"There is a lot of thought-provoking stuff in the book."

John D.Warth, Chess Club of Southern Indiana:
"Tukmakov's discussion is a broad one, citing games dating from 1891 up to 2011 (..) Along the way the author peppers his survey with advice, tidbits and common sense, with strong writing and a balanced approach (..) An important book on a much-neglected top